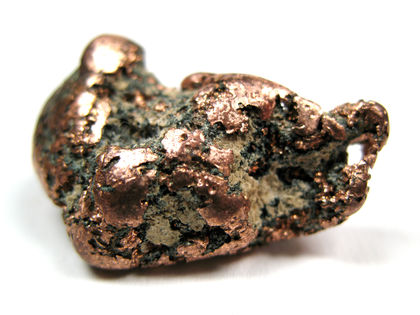 In 2000, Chile produced 35% of the world's mined copper, was home to the largest copper mine in terms of production, and continued to be the top producer and exporter of copper by volume and value. Copper was the country's top industry and export commodity through 2002, and, in 2000, copper accounted for 40.5% of export earnings, which, in turn, accounted for 25% of GDP. Chilean mining activities were also concentrated in coal, iron, precious metals, and industrial minerals, production of which increased significantly in 2000. Iron and cement were also leading industries in 2002. Traditionally dependent on copper exports, Chile also ranked first in the production of iodine and lithium, third in the production of molybdenum, and was a leading producer and exporter of potassium nitrate, sodium nitrate, gold, silver, rhenium, and selenium; iron ore was another primary export mineral. Chile also exported ferromolybdenum, potash, and zinc. In addition, Chile produced arsenic trioxide, lead, manganese, barite, natural borates (ulexite), bentonite, kaolin, other clays, diatomite, dolomite, feldspar, crude and calcined gypsum, lapis lazuli, hydraulic lime, phosphate rock (apatite), pigments (mineral, natural, and iron oxide), pyrite, potassium chloride, pozzolan, pumice, common quartz, salt, sodium compounds (including natural sodium sulfate and anhydrous sodium sulfate), sand and gravel (silica), limestone (calcium carbonate), marble, sulfur, and talc. The production of bentonite, boric acid, diatomite, nitrates, potassium chloride, potassium sulfate, and sulfuric acid was expected to increase significantly in 2001.

In the decade leading up to 2000, when the country's GDP grew by an annual 7%—making it one of the world's fastest-growing economies—mining accounted for 8.5% of Chile's GDP and 47% of exports. In 1973, copper alone accounted for 80% of foreign exchange; the government has since implemented a policy of export diversification. Demand for copper remained strong, and exports in 2000 earned $7.3 billion, up from $5.9 billion in 1999. The mineral industry employed 46,150 in 2000, or 2% of the labor force, with 38,034 workers in the metals sector—31,849 in copper mining—and 5,313 miners in the industrial minerals sector. During the 1990s, investment in mining activities accounted for 34.9% of foreign investment in Chile. In 2000, investment totaled $1.36 billion, and it was expected to reach $1.94 billion in 2001, owing to a number of expansion projects.

Copper output totaled 4.6 million tons in 2000, 4.8% above the 1999 level and up from 3.1 million in 1996—2000 saw a significant recovery in the price of copper and a strong drop in metal stocks. The state-run Chilean National Copper Corp. (Corporación del Cobre de Chile—CODELCO) produced 1.6 million tons of fine copper in 2000 (35% of the country's output), slipping to second among the world's producers. On the other hand, CODELCO positioned itself as one of the industry's lowest-cost firms and remained one of the state's most important sources of revenue—its revenues from copper sales in 2000 were $2.74 billion, and from 1994 to 1999, CODELCO paid $5.45 billion to the treasury. Chuquicamata topped CODELCO's five copper mines with 630,000 tons produced. CODELCO announced a strategic plan for 2001–2006 to substantially increase is value and ability to generate income and has set a goal of doubling the company's worth during the period, to reach a net income of $1.8 billion. With start-up of a tertiary crushing plant scheduled for 2001, CODELCO's Radomiro Tomic operation was to become the world's largest electrowinning cathode facility and one of the lowest-cost copper operations. Another important event was the agreement signed by CODELCO and Barrick Chile Ltda. to explore, operate, and possibly develop the Rio Hurtado property for copper-gold porphyry ore; this would be the first joint venture involving property belonging to third parties. CODELCO announced that it would begin to study the feasibility of developing an underground panel-caving operation at the Chuquicamata mine to access the sizable reserves remaining at depth. Its board of directors approved an expansion of the El Teniente Division—the world's largest underground copper mine using panel-caving methods—to raise annual production from 356,000 tons per year of copper to 480,000 beginning in 2003. CODELCO also produced gold (metal doré), molybdenum (trioxide and concentrate), silver, and sulfuric acid.

In the private sector, La Escondida open-pit copper mine, opened in 1990 and operated by Empresa Minera Escondida Ltda., was the world's largest in terms of production. It produced 920,000 tons over a 12-month period ending in mid-2000, which represented 9% of the world copper market. Escondida's joint-venture partners approved a $1.045 billion Phase 4 expansion in 2000 that would increase the plant capacity by 85% and increase average copper production by 400,000 tons per year, to 1.2 million tons per year during the first five years of full operation; first production from the new concentrator was expected in 2002. Escondida's partners were also considering development of Escondida Norte, with indicated resources of 676 million tons of sulfide averaging 1.03% copper plus 12 million tons of oxides averaging 0.76% copper; inferred resources amounted to 796 million tons of sulfide averaging 0.76% copper and 131 million tons of oxides averaging 0.73% copper. Escondida also had a capacity of 3,300 kg of gold. The newest copper mine, Cía. Minera Los Pelambres Ltda.'s Los Pelambres, came onstream in 1999. The increase of copper and molybdenum concentrate production was principally due to the first full year of operation of Los Pelambres, whose production of 310,200 tons of fine copper was 8.6% in excess of its design capacity.

Gold production increased by 12.6% in 2000, to 54,143 kg, and silver production—derived from the gold and copper mining—decreased by 10%, to 1,242,194 kg. Medium- and small-sized mines produced 73% of the gold and 53% of the silver. The mine life of Barrick Gold Corp.'s El Indio copper/gold mine, which was to close, could be extended by two years (annual capacity of 5,400 kg of gold). Closure operations at Barrick's Tambo mine were to begin in 2000. Barrick was to begin construction at the Pascua-lama gold-silver project, which should be operational by 2003 and would take Chile from 14th to the top ten in gold production. CODELCO's Huérfanos 1270 had a silver output capacity of 604,100 kg per year. Another private producer, Cía. Minera Mantos de Oros, had annual capacities of 18,600 kg of gold and 358,000 kg of silver from its mines at Ladera Farellon.

Chile led the world in natural nitrate production, although world production of synthetic nitrates has sharply reduced its share of nitrate output. The Salar (salty marsh) de Atacama, which held significant nitrate reserves, also contained 58% of the world reserves of lithium; in 2000, lithium carbonate output was 35,869 tons, up from 14,180 in 1996 (second largest, after the US). Aguas Blancas was developing its iodine, nitrate, and sulfate project, which would initially have a capacity of 1,200 tons per year of iodine, and would average 300,000 tons per year of sodium sulfate and 100,000 tons per year of potassium nitrates; the project had known and probable reserves of 44 million tons of ore with an average grade of 512 parts per million iodine, 22% sodium sulfate, and 2.87% nitrates. Miraflores 222, belonging to Corporación de Formento de la Producción (CORFO), a joint private–government venture, had a 7,150-ton-per-year iodine capacity. In 2000, Chile produced 10,474 tons of elemental iodine, up from 5,514 in 1996; 188,000 tons of potassium nitrate; and 800,000 tons of sodium nitrate.

Chilean universities were active in a number of research projects related to the mining industry. One major study continued to investigate the toxicity effects of copper in the environment, in the face of increasingly stringent environmental restrictions being considered in European countries; the results of the research were to influence the debate concerning the allowable copper content in potable water. With consensus that copper prices would significantly increase, the president of the Mining Council saw "a scenario of growth and progress that should continue the positive trajectory experienced by the industry over the past decade."

A cross-border mine treaty between Chile and Argentina, ratified by the countries' presidents in 2000, lifted restrictions on property ownership and access rights for mining and exploration along most of the border and simplified customs and taxation procedures. It was reported that the agreement should result in $6 billion worth of new mining investment over five years. Legislation passed in 1966 initiated a "Chileanization" policy for the copper industry, which provided for government ownership of a controlling share of the sector; US management of the large mines was permitted to continue. Agreements signed in 1967 with the three US-owned companies that produced most of Chile's copper provided for an increase of Chilean participation, expanded investment, and a stable tax and exchange rate; the government was to acquire an equity position in the mines. A law passed unanimously by the Chilean Congress in 1971 provided for the nationalization of the copper holdings of the Kennecott and Anaconda corporations. Copper production grew significantly in the following years, despite the emigration of a large number of trained specialists. The military government of 1973–1990 subsequently compensated US interests for their expropriated holdings and sold many state-owned companies; the three democratic governments since 1990 have continued privatization at a slower pace. Foreign investment in copper has since resumed. The largest recent investment projects were the $2.342 billion La Escondida expansion copper oxides project, which started in 1998; the $2.185 billion Collahuasi copper cathode project, begun in 1998; the $1.8 billion Al Abra copper project, which started in 1997; the $1.307 billion Los Pelambres copper expansion project, which started in 1999; and the $1.33 billion Cerro Casale copper/gold project, whose start-up date had not been determined.

This website has been useful and full of interesting facts but I would like to know more about the environmental effects of mining copper- was forestry destroyed, did species become endangered and were habitats also destroyed?
Thankyou,
Alex.