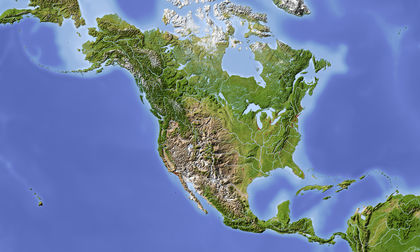 Canada's topography is dominated by the Canadian Shield, an ice-scoured area of Precambrian rocks surrounding Hudson Bay and covering half the country. This vast region, with its store of forests, waterpower, and mineral resources, is being increasingly developed. East of the Shield is the maritime area, separated from the rest of Canada by low mountain ranges pierced by plains and river valleys, and including the island of Newfoundland and Prince Edward Island. South and southeast of the Shield are the Great Lakes–St. Lawrence lowlands, a fertile plain in the triangle bounded by the St. Lawrence River, Lake Ontario, and Georgian Bay. West of the Shield are the farmlands and ranching areas of the great central plains, some 1,300 km (800 mi) wide along the US border and tapering to about 160 km (100 mi) at the mouth of the Mackenzie River. Toward the north of this section is a series of rich mining areas, and still farther north is the Mackenzie lowland, traversed by many lakes and rivers. The westernmost region of Canada, extending from western Alberta to the Pacific Ocean, includes the Rocky Mountains, a plateau region, the coastal mountain range, and an inner sea passage separating the outer island groups from the fjord-lined coast. Mt. Logan, the highest peak in Canada, in the St. Elias Range near the Alaska border, is 5,959 m (19,551 ft) high. The Arctic islands constitute a large group extending north of the Canadian mainland to within 885 km (550 mi) of the North Pole. They vary greatly in size and topography, with mountains, plateaus, fjords, and low coastal plains.

The central Canadian Shield area is drained by the Nelson-Saskatchewan, Churchill, Severn, and Albany rivers flowing into Hudson Bay. The 4,241-km (2,635-mi) Mackenzie River—with its tributaries and three large lakes (Great Bear, Great Slave, and Athabasca)—drains an area of almost 2.6 million sq km (1 million sq mi) into the Arctic Ocean. The Columbia, Fraser, and Yukon rivers are the principal drainage systems of British Columbia and the Yukon Territory. The Great Lakes drain into the broad St. Lawrence River, which flows into the Gulf of St. Lawrence. Other rivers flow laterally from the interior into Hudson Bay or the Atlantic or Pacific ocean.

thanks that was a lifesaver for my project! now i might actually pass ss grade nine!
2
Salu

thank you very much that will help me finish my project and pass 5th grade!
3
Tyler

Thanks so much u saved me! Thank u so much. I aced my ss "challenge". Thank you
4
Stephanie

Now i can pass 7th grade geography :) thanks this will hopefully be helpful!
5
karen

thanks you u helped me passe my colledge exam :) well i hope since i dont have the marcs back yet
6
rabia

U saved my but from my college midterm, thanks bro !
9
Luke

This is amazing! i know can finish my seventh grade paper about canada! yay! thank you! :)
10
Bob

anything about Montreal, and it's topography?? Can someone please help me?
11
Hi

thank you! I'm doing a project in 8th grade about Christmas in Canada so I had to know the basis of the country first.
13
ethan

I ALSO HAD A SAMOSA THAT DAY !!! praise samosa my brother