There were 118.5 million mainline telephones in Canada in 1999. As of 1997, there were about 4.2 million cellular phones in use. The 10 public and private companies in Telecom Canada provide a major share of the nation's telecommunications services, including all long-distance service, and link regional networks across Canada. Telegraph services are operated by the two transcontinental railroads and by the federal government to outlying districts. All external telecommunication services are operated by the Canadian Overseas Telecommunication Corp., a crown agency. The Post Office became a crown corporation in 1981.

The Broadcasting Act of 1968 entrusted the Canadian Radio-Television Commission with the regulation and supervision of all aspects of the broadcasting system. The publicly owned Canadian Broadcasting Corp. (CBC) provides the national broadcasting service in Canada. Its radio and television facilities extend from the Atlantic Ocean to the Pacific and north to the Arctic Circle. The CBC has broadcasting stations in the principal cities and operates both English- and French-language national networks. Privately owned local stations form part of the networks and provide alternative programs. As of 1998, there were 535 AM broadcasting stations, 53 FM stations, and about 80 television stations. In 2000 there were 1,047 radios and about 708 television sets for every 1,000 people. Radio Canada International, the CBC's shortwave service, broadcasts in seven languages to Europe, Africa, Latin America, Asia, the Middle East, the South Pacific, and the United States.

The Canadian communication satellites play an increasingly significant role in efforts to bring radio and television services to the more remote parts of the country, particularly in the north. Beginning in late 1980, a new television network began broadcasting programs in the Inuit language via satellite, offering viewers the opportunity to "talk back" through their television sets to people in other communities. As of May 1987, radio and television services reached 99% of Canadian homes. A broadcasting policy announced in April 1983 increased the quantity of Canadian content required in programming, established a fund to assist private and independent producers, and relaxed licensing requirements for the use of satellite earth-stations for radio and television reception.

In 2001, there were about 760 Internet service providers serving 14.4 million subscribers.

In 2002 there were over 100 major daily newspapers across the country. Although some newspapers in Montréal, Québec, Toronto, Winnipeg, and Vancouver have more than local influence, most circulate only on a regional basis and have a limited number of readers. Rural areas are served by over 2,000 monthly and weekly publications. There are many consumer magazines, but only Maclean's is truly national. Three large news-gathering organizations are the Canadian Press, a cooperatively owned and operated venture, the British United Press, and United Press International of Canada.

Canada's leading newspapers (with their 2002 daily circulations) include the following: 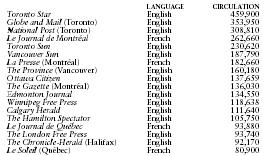 The law provides for freedom of expression, including speech and press, and the government supports these rights. The banning of journalists from reporting on some court cases until after a trial in concluded enjoys widespread public support, in favor of a defendant's right to a fair trial.