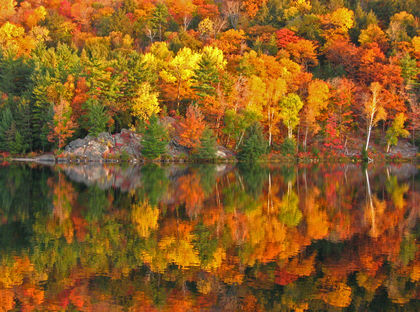 A great range of plant and animal life characterizes the vast area of Canada, with its varied geographic and climatic zones. The flora of the Great Lakes–St. Lawrence region resembles that of the adjacent US section, with white pine, hemlock, sugar and red maples, yellow birch, and beech trees. Coniferous trees—particularly red spruce—predominate in the Maritime region, black spruce in the eastern Laurentian zone, white spruce in the western. In the east are also found the balsam fir, white cedar, tamarack, white birch, and aspen, with jack pine in the drier areas. From the prairie grassland to the Arctic tundra there are aspen, bur oak, balm of Gilead, cottonwood, balsam poplar, white birch, and other deciduous trees. Conifers dominate the northern section. Many types of grasses grow on the interior plains. The wet area along the west coast is famous for its tall, hard conifers: western hemlock and red cedar, Douglas fir, Sitka spruce, and western white pine. Subalpine forests cover the Rocky Mountain area, where there are such conifers as alpine fir, Engelmann spruce, lodgepole pine and aspen, and mountain hemlock. The great Arctic region is covered with low-growing grasses, mosses, and bushes.

Very informative, I found plenty of information for my daughters yr 2 project on Canada, Thankyou.
2
sarah

Thank you so much. I have a 6th grade project about differences between Canada and the U.S. and found exactly what I needed. I recomend this site for ALL of my social studies projects
3
bayana

Thank you!!! I am from Kazakhstan, and it is my home work to find about flora and founa in Canada, you are so informative!!
4
noyb...yo

yo...thx so much im doing a project!! and this is exactly what i needed ur so awesome!!!
5
MADDY

THANK YOU FOR THE INFO I REALLY NEEDED IT FOR MY CLASS WORK HAHAHA THIS MAKES IT EASIER TO DO WITH THIS INFORMATION!!!! =)
6
betty

thanks a lot for the information, children will be happy for the preparation of the class