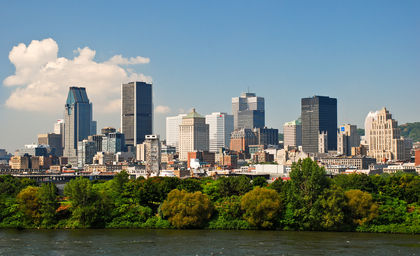 The Canadian economy is the seventh largest among the western industrialized nations. The post-war period has seen a steady shift from the production of agricultural goods toward increased emphasis on manufacturing and services. The service sector employed three-fourths of the workforce in 1999, compared to only half of the workforce in 1960. Canada is a world leader in the production and export of asbestos, nickel, silver, zinc, uranium, cadmium, cobalt, magnesium, gypsum, molybdenum, potash, aluminum, gold, iron ore, copper, fluorspar, and lead. Although no longer the foremost sector of the economy, agriculture is of major importance to the economy as a whole and still is basic in many areas; Canada accounts for approximately 20% of the world wheat trade. Canada is also the world's leading producer of newsprint and ranks among the leaders in other forestry products.

Canada has changed from a country producing and exporting mainly primary products to one that is increasingly producing and exporting manufactured goods. In the 1980s, machinery and equipment joined automotive products among the country's leading exports; at the same time, the importance of natural resource products declined (partly reflecting the 1986 collapse of oil prices).

Canada was hard hit by the recession of the early 1980s, with interest rates, unemployment, and inflation all running higher than in the United States. The effects of the recession on minerals and manufacturing were especially severe. By the end of 1982, all mining operations in the Yukon were closed, and throughout the country more than 70,000 of 115,000 miners were unemployed. The economy recovered during the mid-1980s, and Canada's economic growth rate was among the highest of OECD countries during 1984–86. However, differences in prosperity among the provinces increased during the 1980s, with the central provinces relatively robust, the western provinces suffering declines in growth because of lower prices for oil and other natural resources, and the Atlantic provinces depressed. By the second quarter of 1990, the economy had begun to contract, affected by the recession and the central bank's tight monetary policy. Recovery began in the second half of 1991. Although the 1990s were marked by continued high rates of unemployment and restrained domestic spending, the economy posted an average growth rate in GDP of about 3%. Unemployment was rated at a peak of about 12% in 1992 but had gone down to 8% in 1999.

would have not been able to sleep tonight without the knowledge of the Canadian economy?
3
lilly

thanks bro, you helped me with my project, youre honestly great. this is the only good website i could find.
4
amy

thanks to whoever made this, the only article that i found useful for my project's topic