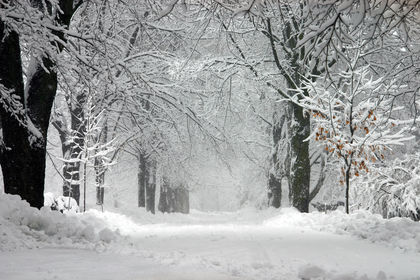 Most of northern Canada has subarctic or arctic climates, with long cold winters lasting 8 to 11 months, short sunny summers, and little precipitation. In contrast, the populated south has a variety of climatological landscapes. The greatest temperature range is in the Northwest Territories, where the average temperature at Fort Good Hope ranges from–31° C (–24° F ) in January to 16° C (61° F ) in July.

Cool summers and mild winters prevail only along the Pacific coast of British Columbia. There the mean temperatures range from about 4° C (39° F ) in January to 16° C (61° F ) in July, the least range in the country. On the prairies there are extreme differences in temperature between day and night and summer and winter. In Ontario and Québec, especially near the Great Lakes and along the St. Lawrence River, the climate is less severe than in western Canada. This region has abundant precipitation that is highly uniform from season to season. The growing season is short, even in the south. Much of the interior plains area does not get enough rain for diversified crops.

East of the Rockies across the flat prairie lies the meeting ground for air from the Arctic, Pacific, and American interior. The mixing of air masses leads to a turbulent atmosphere and the emergence of cyclonic storms, producing most of the rain and snow in the country. The northwest and the prairies, having fewer or weaker storms, are the driest areas, although the prairies are the site of some heavy blizzards and dramatic thunderstorms. The windward mountain slopes are exceptionally wet; the protected slopes are very dry. Thus, the west coast gets about 150–300 cm (60–120 in) of rain annually; the central prairie area, less than 50 cm (20 in); the flat area east of Winnipeg, 50–100 cm (20–40 in); and the maritime provinces, 115–150 cm (45–60 in). The annual average number of days of precipitation ranges from 252 along coastal British Columbia to 100 in the interior of the province.

thx sooo much! i really needed this for my project, and there were no websites. but then i find this!

OMG SO HELPFUL.. FOR A LAST MINUTE PROJECT. I THANK YOU GUYS SO MUCH ... YOU ARE SO AWESOME!!!!
3
Sebastian

Thx so much. Its a great help for my project. Anywayz it was great to have all the average temperatures already calculated and ready to note down.
4
Bob Thompson

what is the monthly average temperature in the interior plains?
5
Matt Alford

what is the average amout of rain in the interior planes?
7
liza

awesome description!! i learned many awesome facts!!the climate article rules!!awesome!!helpful for my project!got an A!!!

Great site. Very easy to read helped me a lot on my project.thx so much!
10
mea mia