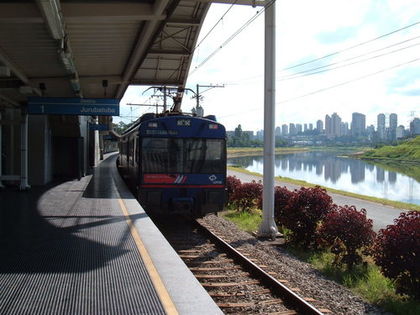 Roads are the primary carriers of freight and passenger traffic. Brazil's road system totaled 1.98 million km (1.23 million mi) in 2002. The total of paved roads increased from 35,496 km (22,056 mi) in 1967 to 184,140 km (114,425 mi) in 2002. Motor vehicles registered as of 2000 included 14,82,001 passenger cars, and 3,300,000 commercial vehicles. Although the bulk of highway traffic is concentrated in the southern and central regions, important roads have been constructed to link the northeastern and northern areas with the industrialized south. Roads of all types have been built with federal aid, the most important being the network of more than 14,000 km (8,700 mi) of paved roads south of Brasília; aid is also supplied for their maintenance. In September 1970, construction began on the 5,000-km (3,100-mi) Trans-Amazon Highway, possibly the most ambitious overland road project undertaken in this century, linking Brazil's Atlantic coast with the Peruvian border; when completed, a 4,138-km (2,571-mi) north-south section will link Santarém, on the Amazon River, with Cuiabá. The project has had a profound effect on the Amazon Basin, among the world's last great wildernesses. However, a World Bank study in the early 1990s showed that 28% of the country's existing highways were in bad condition, up from only 10% in 1979. Lack of proper road maintenance possibly adds 10–15% to total transportation costs in Brazil. As of 2002, the government had privatized or turned over to the states most of the federal highway system.

Brazil's railway system has been declining since 1945, when emphasis shifted to highway construction. The total extension of railway track was 30,875 km (19,186 mi) in 2002, as compared with 31,848 km (19,789 mi) in 1970. Most of the railway system belongs to the Federal Railroad Corp., with a majority government interest; there are also seven lines which the government privatized in 1997.

Coastal shipping links widely separated parts of the country. Of the 36 deep-water ports, Santos and Rio de Janeiro are the most important, followed by Paranaguá, Recife, Vitória, Tubarao, Maceió, and Ilhéus. Bolivia and Paraguay have been given free ports at Santos. There are 50,000 km (31,070 mi) of navigable inland waterways. In 2002, the merchant shipping fleet, which included 165 vessels (1,000 GRT or over), had a total GRT of 3,662,570.

Air transportation is highly developed. In 2001, local and international airlines transported 34,285,600 passengers. In 2001 there were an estimated 3,365 airports, of which 665 had paved runways. Of the 48 principal airports, 21 are international; of these, Rio de Janeiro's Galeao international airport and Sao Paulo's Guarulhos International Airport are by far the most active. The main international airline is Empresa de Viaçao Aérea Rio Grandense (VARIG). Other Brazilian airlines are Transbrasil Linhas Aéreas, Cruzeiro do Sul, (associated with VARIG since 1983), and Viaçao Aérea Sao Paulo (VASP), which handles only domestic traffic and is run by the state of Sao Paulo. All except VASP are privately owned.

you guys are amazing! i'm doing a reaserach project for both my economics and advanced writing composition class and this site is a lot of help. Thanks!
2
Grace

It would be great if you could help me to find some information regarding to these topics. Thank you very much.

I'm doing a research on the transport system in Brazil and would like to know more about the basic situation (recent pictures would also be appreciated), confiquration and government policy
4
Anna

Thank you so much! I found this website and got my part done in about 10 minutes! Ya'll rock!
5
Lisa McNally

I WAS WONDERING WHAT YOU COULD FIND REGARDING TRANSPORT PLANS FOR THE WORLD CUP AND OLYMPICS
ANY LINKS?
THANKS
lISA
6
Keturah Green

I love researching things.. thank u for research, it helps me a lot on research homework...
7
Corie-Ann

I am writing my thesis on the automotive industry in Latin America and using data about Brazil, Chile, and Mexico as my platform. I noticed you provided a statistic regarding the number of motor vehicles registered in Brazil. Would it be possible to get information regarding the number of motor vehicles registered between 2005-2017 for Brazil, Chile, and Mexico? If not, I would greatly appreciate it if you would tell me where I might be able to find that information.