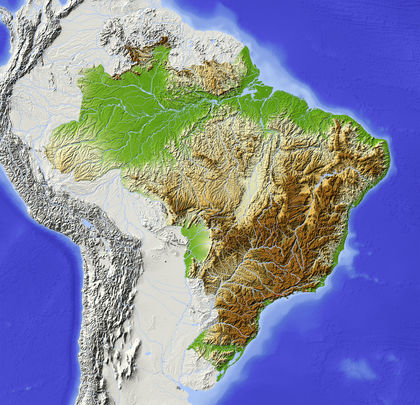 The northern part of Brazil is dominated by the basin of the Amazon River and its many tributaries, which occupies two-fifths of the country. The Amazon Basin itself occupies 7,049,975 sq km (2,722,000 sq mi), or about 40% of South America's total area. The Amazon River (Rio Amazonas) is, at 6,436 km (4,000 mi), the world's second-longest river after the Nile, although the Amazon ranks first in volume of water carried; rising in the Peruvian Andes, the Amazon eventually empties into the Atlantic Ocean at an average rate of about 198,000 cu m (7 million cu ft) per second. The Amazon lowlands east of the Andes constitute the world's largest tropical rain forest. In the northernmost part of the Amazon Basin lies a series of mountain ranges, known as the Guiana Highlands, where Brazil's highest mountain, Pico da Neblina (3,014 m/9,888 ft), is located. South of the Amazon Basin is a large plateau called the Brazilian Highlands, ranging in elevation from 300 to 910 m (1,000 to 3,000 ft) above sea level. From the city of Salvador (Bahia) southward to Pôrto Alegre, the highlands meet the Atlantic Ocean in a steep, wall-like slope, the Great Escarpment, which in southeastern Brazil is surmounted by mountain ranges with elevations from 2,100 to 2,400 m (7,000 to 8,000 ft) above sea level.

The Atlantic coast of Brazil has no real coastal plain, but there are stretches of lowlands along the northeast coast, and there are many baylike indentations, where Brazil's principal cities are located. Along the southwest border is a small portion of the upper Paraguay lowlands. The Paraná, Paraguay, and Uruguay rivers flow through southern Brazil; the São Francisco flows 3,199 km (1,988 mi) through northeastern and central Brazil; and the Tocantins (2,698 km/1,677 mi) empties into the Pará and from there into the Atlantic Ocean at an estuary south of the Amazon proper.

Thanks for the information.
i have a project for my history teacher.
it's actually bonus extra credit, but every little info counts
So THANKS!!!
3
Helen

Thanks this really helped me , i need all the information i need for my french project.
THANKS ALOT!!
4
meg

THANK YOU SO MUCH FOR THIS INFORMATION! IT HELPED A LOT FOR OUR NEWLETTER PROJECT ABOUT BRAZIL! LOVELOTS!
5
Allie

THANK YOU SO MUCH!! I NEEDED THIS INFO FOR A PPT PRESENTATION!!! THANK YOUUU!!
6
Ana

This helped for my cultural analysis geographical settings for my global marketing class. Thanks for the info
7
dougie fresh

thanks for the info, I needed this for a presentation, thanks a lot!!!
8
Shiarna

THANK YOU! i needed this infomation for a powerpoint for excotic eating project :)
9
Mark

you guys are the BEST IN THE WORLD, you saved my but from failing world cultures. THANK YOU
10
Mark

SAVED MY BUTT YOU GOOD PEOPLE!!! Where did you guys get this information?
11
john

Wow, that's really helpful! This is great for my project on Brazil!
13
Kyle

This Will Help Me Big Time In Social Studies Class!
15
my mother

thank you so much!! this helped me alot with my social studies
16
Hazel

thank you so much i needed this for my world geography report!!
17
Ryn

Thanks a bunch for helping me with my science project! I'm forever in your debt and I really appreciate your efforts, kind soul.
18
Holly

Thanks so much I have an assessment due for humanities and I had no idea what the answer was, well till now :) thanks again
19
Shreya

Thank you, I have a social studies project on Brazil, and we have to include the topography for one of the slides. Thanks again! -review genius