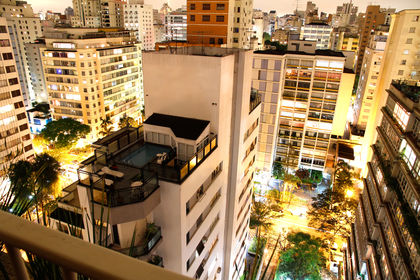 Major industries include iron and steel production, automobile assembly, petroleum processing, chemicals production, and cement making; technologically based industries have been the most dynamic in recent years, but have not outpaced traditional industries. Peak industrial growth was achieved in 1973, when the manufacturing sector grew by 15.8%; growth rates averaging about 7% were posted during 1978–80, rising to 8.3% in 1985 and 11.3% in 1986. Growth slowed significantly during the 1990s. According to the Brazilian Statistical Institute (IBGE), manufacturing rose an annual average of only 0.7% between 1988 and 1998. Manufacturing expanded from 2.6% growth in the third quarter of 2002 to 6.6% in the fourth quarter. Growth in 2002 was particularly pronounced in the construction industry.

In 1969, 3.7 million tons of crude steel were produced; by 1985, this had reached 20.5 million tons; and by 1998 the total output of processed ore was 190 million tons. Domestic production exceeds domestic needs. Vast reserves of accessible, high-grade ore, plus a rapidly expanding domestic demand for these products, favor continued expansion of the steel industry. The major negative factor is lack of domestic soft coal. Companhia Vale do Rio Doce (CVRD) is the largest Brazilian mining company, responsible for nearly 23% of the mineral output of the country.

Motor vehicle production, Brazil's industrial backbone, experienced a drop of nearly 27% from 1998 to 1999 because of the country's financial difficulties. Production of automobiles went from about two million units in 1997, down to 1.6 million units in 1998. In 2001, Brazil produced 1,798,472 automobiles, an increase of 7% over 2000. In 2000, the country produced 70,304 heavy trucks, an increase of 27% over 1999. The automobile industry is expanding rapidly with major sources of foreign investment and the construction of new manufacturing plants.

Brazil mines and refines petroleum products. The country in 2002 had 13 oil refineries with a total production capacity of 1,786,000 barrels per day. Because of increased domestic refining capacity during the 1970s, imports of petroleum products were less needed, and by 1979, Brazil was a net exporter of petroleum derivatives. In 1998, Brazil only imported 50% of its petroleum. Brazil's petrochemical industry emphasizes the production of synthetic rubber at Petrobrás' synthetic rubber plant. There are also over 500 pharmaceutical laboratories and plants in Brazil, the majority in São Paulo. Over 80% of the industry is foreign-owned. Increased construction demands boosted Brazil's cement production during the 1980s and 1990s. Brazil's electrical equipment industry manufactures computers, television sets, transistor radios, refrigerators, air conditioners, and many other appliances. Brazil has the largest textile industry in South America in terms of installed capacity and output, with nearly half of the spindles and looms in operation on the continent. The Brazilian pulp and paper sector is also large, consisting of more than 220 companies, which together employ approximately 80,000 people in industrial operations, as well as another 57,000 in forestry work and operations. The pulp and paper sector is almost fully privately-owned. The government allowed foreign investment in vital industries since 1995, and supports the sale of any residual parastatal enterprises.

Thank you this helped me a lot. It was exactly what i was looking for.
2
maaz

thanks! This was exactly what i needed for my country report. you totally saved me!
4
arron

thanks mate u saved my life i neede that type of infomations cheers:)
5
eddie

thanks! This was exactly what i needed for my country report. you totally saved me!
6
Andy

Lol cheers, you helped me loads with my geography assessment. I have two weeks worth to do in the space of about three hours :(
7
Gagan Kharbanda

Thanks, the above mentioned report is really good and in brief but cover almost all the industrial strength of Brazil.
I want to know about oil extraction industry in Brazil especially palm oil extraction.
Can you please let me know the same.
8
Melyssa

Thanks so much, u saved me time :) cheers, this info was awesome! very helpful, please inform me on any more info on brazil in the future :)..
10
Cracker

Thank you so much, i guess i'm getting a lovely A* for my report!
12
sassasman

Thank you, you saved me from gettin isolation. you helped me loads on my Geography projekt, thanks (: :)
13
izzy

Thank YOU! :) Helped me alottt . I really enjoyed this website. My report is due in THREE days.
15
Jacobi

Great info for my research, thanks a lot! This is the best website I've been to for industry on Brazil :)
16
Trevor

Thankyou for this valuable information, Who is the Author of this Article?
17
kenyone

thanks so much for this it saved my life and my histroy!!
18
karen

You are AWESOME!!!:)Thanks for the info you gave me; it helped me do homework!
20
Silas

Thank you so much for the information 8)
I was literally pulling hair out with the stress
in my school we have to do a project in Brazil
industry was easily the hardest page
thank you so much :3
8]
21
Bhavya

Amazing! Everything I need in one place. Thanks a lot!
22
brie

thanks so much you helped me a lot! I'm doing a power point on Brazil for Geography and this really helped
25
Elias

Thank you this information was good. I recommend this website to other people
26
Honey Boo Boo

Thanks just what i was looking for. Very good information
27
Zacharias Marshiallus

Thank you! I had to do a country report and this saved me!
29
Jake

This helped me on my history essay so much, thank you guys
30
Nicolas Nogueras

This was useful information. I will win the contest about the best information about Brazil.