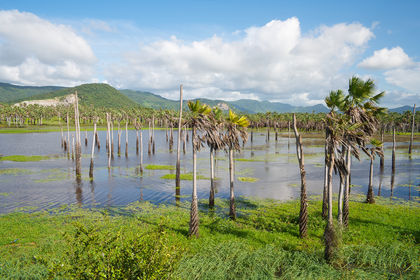 In 1999, 17.3% of Brazil's economically active population worked in agriculture, down from 23.3% in 1990. Total arable and permanent crop area comprises 65.3 million hectares (161 million acres). Although agriculture's share of exports has declined relative to industrial goods, the value has continued to increase, so that Brazil in 1977 became the world's second-largest exporter of agricultural products. Except for grain (particularly wheat), of which some seven million tons had to be imported in 2001, Brazil is virtually self-sufficient in food. The growth rates for agriculture as a whole averaged 2.8% during 1980–1990, and 3.2% for 1990–2000. By 1999, agricultural production was 20.2% higher than during 1989–91. In 2000, agriculture accounted for 7% of the total GDP. Export crops are significant—in addition to the traditional exports of coffee and cocoa, Brazil is also a major exporter of soybeans and orange juice. In 1999, Brazil ranked fourth in the production of cocoa beans (after Côte d'Ivoire, Ghana, and Indonesia) at 206,000 tons, or 7.1% of the world's cocoa bean production. In recent years, however, production has been devastated by the effects of the witches-broom fungus.

The Land Statute Law of 1964 was designed to modify the agrarian structure and increase agricultural output in selected regions over a 20-year period. The law empowered the federal government to expropriate unused or underutilized land by offering indemnification in bonds in the case of large properties and cash payment for smallholdings. In redistributing expropriated lands, priority is given to those who work the land under tenancy, sharecropping, or ordinary labor agreements. Responsibility for implementing the law is divided between the Brazilian Agrarian Reform Institute and the National Institute of Agricultural Development. In October 1984, a law was passed to facilitate the distribution of 43.1 million hectares (106.5 million acres) of state-owned land and non-productive private estates to1.4 million peasant families, primarily in the impoverished northeast, through 1989. The formation of cooperatives was encouraged.

Coffee, until 1974 preeminent among export earners, has been declining in importance since the early 1960s, while soybeans, sugarcane, cotton, wheat, and citrus fruits have shown dramatic increases. Brazil led the world in coffee production in 2002/2003, at 3,096,000 tons. Sugarcane production, in which Brazil ranked first in the world in 2002/2003, is grown not only for refined sugar but also as a source of alcohol for fuel, and totaled 22,750,000 tons that season. In 1999, production included 22,772,000 tons of oranges, 20,973,000 tons of cassava, and 125,000 tons of cashews. Tobacco production in 2002 totaled 570,150 tons, 10% of world production. Agricultural production in 2000/2001 (in millions of tons) was corn, 35.5; soybeans, 39.0; rice, 6.9; wheat, 3.3; and cottonseed, 1.5. Further agricultural reforms have been carried out under the Carta de Brasília of 1967. The Carta included an incentive program for the construction of storage facilities, to permit farmers to hold products off the market in expectation of better prices. Agricultural research in Brazil is conducted by the Agriculture and Cattle Raising Institute of Research. The expansion of power, transportation, and communications systems during the 1970s further contributed to agricultural development.

hey this is a good article and i also like it alot!!!
2
ahmad

what thing that make the agriculture sector only .08?
3
frosting

This was avery nice article. I liked it a bunch. It was so cool. I am very interseted in Brazil. PLease write more articles on this selection. Thanks for this very awsome information.