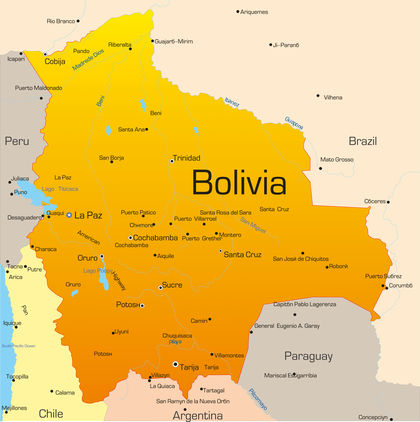 Bolivia's outstanding literary figure is Gabriel René-Moreno (1836–1909), a historian, sociologist, and literary critic. The highly original poet and philosopher Franz Tamayo (1879–1956), although belonging to the landed aristocracy, was a champion of the downtrodden Amerindian. Tamayo was elected president in 1935, but an army revolt prevented him from taking power. Alcides Argüedas (1879–1946) achieved fame throughout Latin America with his historical works on Bolivia and his novels Wata wara and Raza de bronce, concerned with the plight of the Indian; his critical sociological study Pueblo enfermo provoked an enduring controversy. The archaeologist and anthropologist Arturo Posnansky (1874–1946), born in Austria, did pioneering work in studying the civilization that once flourished at Lake Titicaca. Jaime Laredo (b.1941) is a world-famous violinist.

this site really helped me with my spanish project!!!!!! i love this site
2
fabian

I'm doing a project on my Spanish homework and this really helped thanks!!!
3
Rogina

I'm doing a project on my Spanish homework and this really helped thanks!!!
5
malik

This helped a lot. I had to do a small project and this got more than half of the famous person part done. Thanks.
8
walkdslkf

im in school right nowdoing a report on boliviahaha thanks!
10
Jills

O my gosh this saved me i had a last minute paper on bolivia that i have to turn in the next day YIKES!! thank you whoever made this website!
11
chelsea

im in school working on a spanish project, this helped a bundle thanks.
13
Ku

This isn't only about "homeworks" as everybody seem to believe. This page is something more than information that you'll copy and then repeat without thinking any further. This is some valuable information about people you really stand up in a country that has one of the most destructives desseases: indifference.
In deed, in Bolivia there isn't a real reflexion about our heritage and the work that has been made by these men remains unnoticed. However, this absence of historical consciousness prevents us from having a solid projection in the futur.
The so-called recovery of our roots should take into account the concret work that those men had made in order to interogate their doctrines and build a national identity that isn't just symbolical but also theorical.
14
Amy

this site helped a lot with Spanish. thanks a bunch
15
chava

im doing a spanish project about boliva and im goign through all these different site and searching for some famous/ important people and i come across this site and i got and A on my Bolivian Brochure! thank you so much whoever owns this!
16
Jazmin

This website helped alot...i have to do a project in my spanish 2 honors class about Bolivia's culture and this really helped.
17
jaylan

Im doing a spanish project and this is really helpful thank you!:)
18
fgtrj

I want to thank you for the information that you are publishing on this website, it's really helpful,but what about the most recent information about famous people in Bolivia that are living?
20
someone

this helped alot! doing a bolivia project and i hope i get an A! Gracias!!
21
Charity

this really helped but you should include some picture; anyways thanks(:
22
Olive

Thanks so much for this! I have a 77 page report due tomorrow, and its almost done except for the section on historical persons! Then i saw your website and was so relieved. Thanks! I also learned a lot about the history of Bolivia and the people who brought it to the place it is now.
23
Steve

Thanks!!!Helped me a lot on my Bolivia report. :-)