About half of Belize's recurrent expenditures are financed by customs duties; nearly all capital spending is funded by foreign loans and grants. Since an IMF standby stabilization program was implemented in 1985, fiscal responsibility has improved. The government typically budgets over 50% of projected spending to capital development, and raises 60% of current revenues from trade taxes. Government spending accounts typically for almost one-third of GDP.

The US Central Intelligence Agency (CIA) estimates that in 2000 Belize's central government took in revenues of approximately US $186 million and had expenditures of US $253 million. Overall, the government registered a deficit of approximately $67 million. External debt totaled US $500 million. 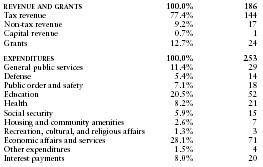