The economy is dependent on agriculture and fishing. Sugar, bananas, and citrus fruits are the main cash crops. Until a recent depletion, the country's main export had been forest products, especially mahogany. Belize continues to import most of its consumer goods, including much of its food and all of its petroleum requirements. The tourism industry, fishing industry, and the garment manufacturing industry grew in importance during the late 1990s.

Belize started the decade of the 1990s positively. However, after five years of economic growth averaging 4.3%, the economy decelerated to 1.5% in 1996. This was largely due to a slowdown in tourism, a decline in fisheries production, and cutbacks in public spending and construction. The agricultural sector grew rapidly in that year, with banana and sugar production up by 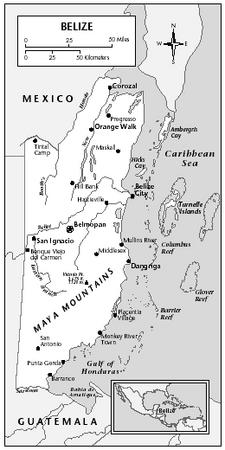 significant amounts, while production of oranges was nearly flat. Fishing was also hurt by corrective measures to overcome the taura virus which affected farmed shrimp production and lower lobster catches. In 1997, the government implemented austerity measures and capital projects that continued the economic depression in the short-run. The agricultural industry experienced a decline of production in 1998, but the fishing, tourism, and garment manufacturing industries gained ground. In 1997 and 1998, GDP growth hovered around 3%, but the forecast for 1999 through 2003 was only 1.5%.

Belize's future economic growth is linked to the improvement of technology and physical infrastructure. The Agency for International Development (USAID), the World Bank, the UK, the EC, the Caribbean Development Bank (CDB), Canada, and Taiwan have provided assistance to Belize for the reconstruction and pavement of major highways, and the construction of houses. Electricity has become dependable, and the telecommunications system is reliable.