Beginning in 1970, Argentina's budget picture steadily worsened. By the late 1970s, deficit spending annually ranged from 10–14% of GDP, and topped 15% in the early 1980s, when public expenditures consumed some 40% of GDP. By the late 1980s, hyperinflation and depletion of reserves necessitated a public finance reform. Since 1991, the government has considerably narrowed the deficit gap through structural reform efforts. Stricter controls on public spending and more efficient tax collection methods resulted in an overall public sector accounts deficit of only about 1% of GDP, compared to a deficit equivalent to 21.7% of GDP in 1989. The deficit grew marginally worse in the late 1990s, reaching 5% of GDP in 1998. Although tax enforcement has improved, evasion is still a major problem. Continued heavy expenditures and low tax revenues threatened to generate a deficit in 1999 and 2000. In 2001, Argentina defaulted on its record $155 billion external debt, the largest such default in history.

The US Central Intelligence Agency (CIA) estimates that in 2000 Argentina's central government took in revenues of approximately $44 billion and had expenditures of $48 billion. 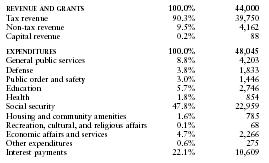