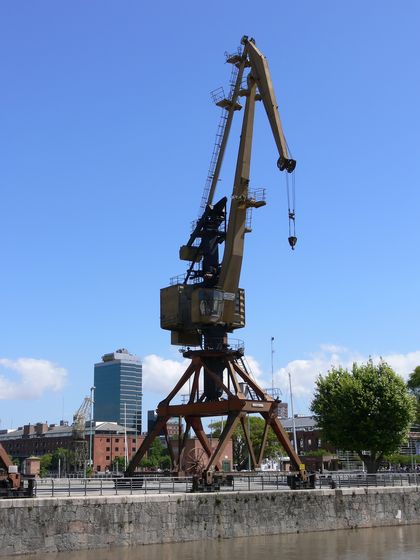 Córdoba is Argentina's major industrial center. It is the center of metalworking, especially for motor vehicle production. Argentina's other principal industrial enterprises are heavily concentrated in and around the city of Buenos Aires. The plants are close to both the many raw materials imported by ship and the vast productive area of the pampas. The major industries in Buenos Aires are food processing, motor vehicles, consumer durables, textiles, chemicals and petrochemicals, printing, metallurgy, and steel. Other industrial areas include Rosario, with important steel-producing plants and oil refineries, tractor and meat-packing plants, and chemical and tanning industries; Santa Fe, with zinc- and copper-smelting plants, flour mills, and dairy industry; San Miguel de Tucumán, with sugar refineries; Mendoza and Neuquén, with wineries and fruit-processing plants; the Chaco region, with cotton gins and sawmills; and Santa Cruz, Salta, Tierra del Fuego, Chubut, and Bahía Blanca, with oil fields and refineries.

Packing and processing of foodstuffs is the oldest and most important industry in Argentina. Beginning in the last part of the 19th century, the great frigoríficos, or meat-packing plants, were founded to prepare beef for export to Europe. In recent times, the Argentine government has entered directly into the meat-processing enterprises, which for many years were under British ownership. The textile industry was also developed quite early, making use of wool from the vast herds of sheep and the cotton from Chaco Province. In addition to these traditional products, a variety of synthetic fibers are now produced.

Portland cement is the country's leading construction material. A major chemical industry produces sulfuric, nitric, and other acids and pharmaceuticals. The most important center of this industry is San Lorenzo on the Río Paraná. The petrochemical industry is related to the increasing production of oil and has received special benefits from the government. In 1985, exports of petroleum fuels exceeded imports for the first time, and by 1999 Argentina was self-sufficient in oil and gas. Natural gas annual output growth should reach 3.4% for the next decade. Output of petroleum fuels reached 800,000 barrels per day in 1999; at the same time, new oil reserves were found in Rio Negro Norte. In 2002, Argentina had 10 oil refineries with a total capacity of 639,000 barrels per day.

In 1961, a giant integrated steel mill began production at San Nicolás. Dependent on steel is the automobile industry, which experienced fairly sustained growth during the 1960s and 1970s. Production rose from 33,000 units in 1959 to 288,917 in 1980. Motor vehicle production peaked at 450,000 in 1998, falling back to around 300,000 in 1999. There were 235,577 automobiles produced in 2001, a 31% decrease from the 339,632 units produced in 2000. Tractors, motorcycles, and bicycles also are manufactured. Argentina also produces electric appliances, communications equipment—including radios and television sets—motors, watches, and numerous other items.

Industry continues to restructure to become competitive after decades of protection. Capacity utilization rates have increased substantially and companies are now focusing on modernization and expansion of their plants to meet both domestic and foreign demand. New technologies are being adopted, work forces pared, and management is focusing on just what its clients want. Output of cement, trucks, machinery, plastics, petrochemicals and other chemicals all rose, while production of basic metal goods held flat or rose off a low base in the 1990s. A recession that began in 1998 was exacerbated by the economic crisis of December 2001, with Argentina's default on its foreign debt, devaluation of the peso, and conversion of dollar debts and deposits to pesos. Industrial production began to increase in late 2002, however, and the best-performing sectors were textiles, automobile tires, and oils.

I live in Canada. I have relatives in La Plata, that visited them in 2013. I always wandered about what ware the main industries. Thank You for the articol.
2
Beany

You spelled both wondered and article wrong. Sorry for correcting you it's just I'm picky on my grammar.