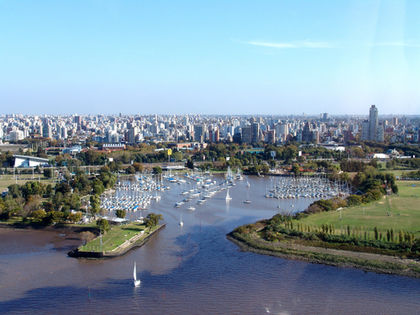 Argentina's government is ruled by its 1853 constitution, although that document has been suspended many times. The basic structure is federal and republican. In 1949, the Perón government adopted a new constitution, but the subsequent military government expunged that document. Some modifications in the original constitution were subsequently made by a constituent assembly that met in October 1957. In July 1962, a system of proportional representation was adopted.

The constitution provides for a federal union of provinces that retain all powers not specifically delegated to the federal government by the constitution. There is a separation of powers among the executive, legislative, and judicial branches, but the president is powerful within this arrangement. The president can draw up and introduce his own bills in Congress, appoint cabinet members and other officials without the consent of the Senate, and possesses broad powers to declare a state of siege and suspend the constitution. The president is commander-in-chief of the army, navy, and air force and appoints all major civil, military, naval, and judicial offices, with the approval of the Senate in certain cases. The president is also responsible, with the cabinet, for the acts of the executive branch and has the right of patronage (control over appointments) in regard to bishoprics. The president and vice president are directly elected for a 4-year term and cannot be re-elected beyond a second consecutive term. They or their parents must be native-born citizens. Voting is compulsory for all citizens 18 to 70 years of age.

The constitution calls for a National Congress consisting of a Senate and a Chamber of Deputies. The 72 senators are directly elected, 3 from each of the 23 provinces and the Federal District of Buenos Aires. The term of office is set at six years, with staggered elections every three years for one-third of the membership. The Chamber of Deputies is the result of direct elections for 257 seats. Seats are allocated to each province in proportion to its population, but less populated provinces are over represented. The deputies' term of office is four years, with one-half of the membership being elected every two years. The Chamber of Deputies is authorized to receive the budget and initiate fiscal legislation and has the exclusive right to impeach officials before the Senate.

The most recent suspensions of the constitution were between 1966 and 1973, and then again from 1976 until 1983. During the most recent suspension, a military junta performed the executive, legislative, and judicial functions. Since the resumption of civilian government in 1983, there has been an uneasy relationship between the military and the government. The controversial trials of military leaders led to serious questions about the credibility of the judiciary and mild sentences for the accused. Yet, after more than 17 years of democratic government, there appear to be new efforts to bring former military leaders to justice. Revisions to the constitution were approved in August 1994. During political crisis of the late 1990s, the military was unwilling to step back into political life signaling a consolidation of democracy and civilian rule in Argentina.

So I don't get it! How in the heck does Argentina's government work?
3
julius

what is the organization of government?? social studies problem 8(
5
Francisco

thanks you the facts about argentina's goverment. I going to get an A+ on it
7
bill

omg this is the best website ever and am sure i am going to get a a+
8
Child, NO!!

can I copy and paste this for my Spanish class? Just Kidding. This will help me get an A+