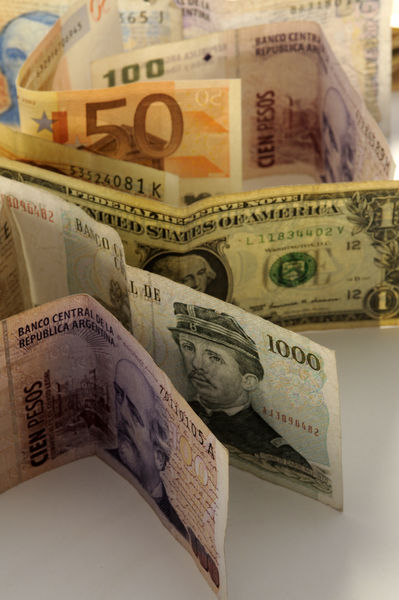 Argentine economic policy has undergone several cycles of change since the 1940s. During World War II (1939–45), the demand for Argentine beef and wheat boosted the country's exchange reserves to their highest point in history. Under the Perón regime (1950s), however, declining terms of trade and increasing state benefits and subsidies, as well as Perón's attempt to industrialize Argentina at the expense of the agrarian sector, disrupted the nation's economic system. Although inherently a wealthy country, Argentina, with a crushing foreign debt and a shattered economy, was nearly bankrupt.

When Perón fell in 1955, steps were taken to fund foreign obligations with long-term provisions for Argentine repayment and to create a climate favorable to private investment. Complicated multiple exchange rates were abolished, and massive financial assistance was extended by the International Monetary Fund (IMF) and other foreign agencies. Staggering deficits in the railroads and other state enterprises were a constant problem. The government sought to turn over some of these to private hands, and it also encouraged livestock raising and agricultural production, the chief earners of foreign exchange.

The government abolished many of the state subsidies and at the same time tried to hold wages steady. The austerity program fell hardest on the workers, who saw wages increase sluggishly while prices skyrocketed. They sought political solutions to the economic problems through crippling strikes, which in turn robbed the government of the increased production on which it was relying for a solution to the economic crisis. Between 1960 and 1966, the problems continued, with the government fluctuating between economic nationalism and liberal policies designed to seek foreign investment. Inflation, unemployment, and commercial failures reached new highs. Economic strife formed the backdrop for the military coup of 1966 and the suspension of the constitutional government. Despite widespread opposition, steps were taken in the late 1960s to turn over some state enterprises to private owners; other measures sought to put state-owned businesses on a paying basis.

The 1970s brought a resurgence of economic and political instability. The return to constitutional government—and especially the return of the Perónists to power in the late 1960s—brought a period of increased labor influence, extraordinary wage demands, accelerating inflation, and huge government deficits, largely financed through short-term borrowing. The government's Three-Year Plan for Reconstruction and Liberation, announced in December 1973 during Juan Perón's presidency, called for more equitable distribution of income, elimination of unemployment and underemployment, better regional distribution of wealth, and extension of government housing, health, welfare, and education programs and services.

Perón's death in July 1974 and the subsequent political instability aborted this program and led to an economic crisis. In 1978, a medium-term economic adjustment plan, based on free-market principles, was announced. It included regular devaluations of the peso, cuts in public investment, and return of some state enterprises to private ownership; but instead of improving the nation's economic performance, the new policies led to triple-digit inflation and increasing unemployment. In the fall of 1982, the government began to negotiate with the IMF for a standby loan and committed itself to an austerity program, consisting of cuts in government spending, higher interest rates on bank loans to the private sector, and continuing regular devaluations. Additional financial controls, including a temporary ban on the issuance of new import licenses, were imposed the following autumn.

The "Austral Plan," launched in June 1985, was an attempt by the government of President Raúl Alfonsín to break out of the stagflation that characterized the economy since 1982. The combination of a wage-price freeze, a new currency pegged to the dollar, and a commitment to austerity in public spending was initially successful in curbing inflation, although somewhat at the expense of development. Since then, the government has attempted to manage price and wage increases and has offered several public corporations for sale. Multilateral assistance to Argentina totaled $6.3 billion between 1962 and 1986, of which 51% came from the IDB and 41% from the IBRD.

In the 1990s, the industrial sector's performance was excellent, in particular the food processing, construction, and automotive industries. Demand for consumer durable goods was strong as a result of ample credit availability. Construction activity was boosted by infrastructure projects associated with the privatization. Sweeping privatization and a wave of investment, both foreign and local, modernized old industries and nourished new ones. Farmers started to plant more profitable products, such as garlic, fruit, and olives. A new mining code brought foreign investment to a long-neglected sector. Oil and gas output doubled, attracting investment in petrochemicals, while MERCOSUR encouraged a boom of car exports. A recession in 1999 caused capital flight and high interest rates. Consumption was slow to pick up, and unemployment remained at around 12%. It was estimated that nearly 40% of the workforce was employed in the black market.

A combination of Argentina's fixed exchange rate, which made its currency uncompetitive, and continuing fiscal deficits led to the country's economic collapse and default on the bulk of its $141 billion in foreign debt in December 2001. The IMF at that time refused to grant Argentina an emergency $1.3 billion loan. By 2003, the government had suspended the last remaining controls on bank savings, and eased capital controls. The 2002 devaluation of the peso by 2003 had led to growth in exports and a rise in local products being substituted for imported ones. There was a good harvest that year, industry revived, and tourism rebounded as increasing numbers of foreign tourists visited Argentina's resorts. A standby agreement with the IMF that began in January 2003 was reviewed in June, and resulted in the release of $320 million.