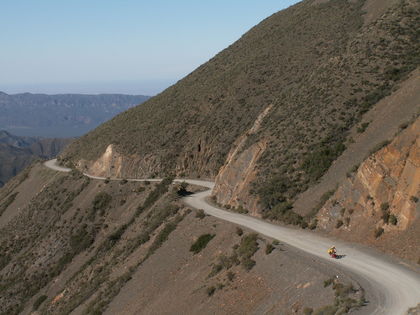 Argentina's climate is generally temperate, but there are great variations, from the extreme heat of the northern Chaco region, through the pleasant mild climate of the central pampas, to the subantarctic cold of the glacial regions of southern Patagonia. The highest temperature, 49° C (120° F ), was recorded in the extreme north, and the lowest,–16° C (3° F ), in the southern tip of the country. Rainfall diminishes from east to west. Rainfall at Buenos Aires averages 94 cm (37 in) annually, and the mean annual temperature is 16° C (61° F ). Light snowfalls occur occasionally in Buenos Aires. Throughout Argentina, January is the warmest month and June and July are the coldest. North of the Río Negro, the winter months (May–August) are the driest period of the year. The wide variations of climate are due to the great range in altitude and the vast extent of the country. In the torrid zone of the extreme north, for example, the Chaco area has a mean annual temperature of about 23° C (73° F ) and a rainfall of about 76 cm (30 in), whereas Puna de Atacama has a temperature average of 14° C (57° F ) and a rainfall of about 5 cm (2 in). The pampas, despite their immensity, have an almost uniform climate, with much sunshine and adequate precipitation. The coldest winters occur not in Tierra del Fuego, which is warmed by ocean currents, but in Santa Cruz Province, where the July average is 0° C (32° F ).

thanks a lot!!!!!!!Your infomations goig to get me An "A" on my research for "Argentina"
2
William

My husband and I are going to Argentina for our honeymoon and your information was just splendid! Thanks a ton!!! Keep up the great work you little devils!!
3
maritsa

Thanks for the info on the climate im doing a report on argentina and this is sure to get me a A. thanks alot!!! keep up the good work on the info
5
Dakota leitch

This helped me lots on my research project. I wish i lived in argentina.
6
4est

thanks a lot this will help on my nations project so that my teacher wont freak
7
Mr. Koool guy

ha thanks for everything.! this really helped. :)) hopefully i will get an A on my assignment!
12
Chris

Um, I'm in elementary so I didn't really understand, but at least it gave me some info. Thanks!
14
lola

thanks for the info... but i was wondering if you knew the tempuratures range by season or month (possibly if you could throw in a graph you would be my hero).. my teachers requests are killing me and there is hardly any info on the pampas!
15
Isaac

thankyou it really helped me on my spanish project!
16
elijah

my brother found this cite, its great cause i'm doing a weather report on argentina for spanish
=)
18
U dont need to noe !

This helped me A LOT on my project. My teacher said half a page one day then a whole page another so i needed to make things longer
20
Josie

I'm doing a "vacation brochure" for my Social Studies class and this information is MAGNIFICENT! I love it!
Keep up the good work!
21
Calos

i am making a brochure on Argentina.I need to find the location,and the food.
22
Matt

The one thing I needed was in the first sentence. :)
24
Cris

thanks a millon! my parents finally kicked me out of the house! i got an f on my test and flunked history class! but i finally got out of that hell hole from using this website about argentina! thanks!
26
JojoLilRed

This paragraph really helped me with my paper about Argentina, but I still need the average summer and winter temperatures.
27
kate

thanks im doing a report on argentina ur website helps a tun :) :P
28
Joyce Cueto

I am doing an article on Argentina and this info isn't really helping at all. I t's all right I guess.
29
Bob

This kinda helped but i need more info ty anyways, i guess i can use this info for my project
30
Nicole

Very helpful information for my science project!!! Everything that I needed was in this paragraph
31
julian

very useful to my group. it helped me and my group do what we needed to do
32
Wally

Hello everybody,
For the sake of accuracy I'd like to mention that the lowest temperature recorded in Argentina is 39 Celsius below zero (-38 Fahrenheit) on July 17, 1972 in the western San Juan Province. The official record is on the Argentina weather Service Page (Servicio Meteorologico Nacional -- I am not allowed to provide the link on this board. Sorry!)
Thanks!
Wally
33
Deedee

Argetina seems like a very beautiful place to be. Wonderful, but the weather seems so cold. i am used to the Arizona weather.
34
Helpless Researcher

Thank you for putting this up! This helped me on my project of Argentina!
35
Tommy

Wow thanks i will now keep an A throughout this year... argentina is a wonderful place and i love to study it.thanks for the help!!!
37
spirit johnson

THANKS THIS HELPED WITH MY POWERPOINT ON ARGENTINA.YOU ARE THE BEST.KEEP WRITING DETAILS ABOUT ARGENTINA
38
Asa

so helpful I need this for an assignment in class.
39
some doing a procject

this REALLY didnt help me on my project for argentina
40
william k .m

Thanks alot i believe that i have got a real info concerning Argentina climate cause am doing a seminnar work ithink it helped me more ;but what i want to ask you just give me a real annual average of rainfall of argentina per year
41
sophia

Thanks so much! This information was super useful for my speaking presentation on Argentina!
42
Caitlin

Thx! I am doing a report on Argentina and this helped a lot!