Until 1952, Argentina's foreign-payments position was excellent, owing mainly to its large exports of basic commodities, principally agricultural products. In that year, however, because of widespread crop failures and unfavorable terms of trade, export value decreased sharply while imports remained high. The Argentine deficit was met by foreign credits, with dollar shortfalls partially covered by large credits from the Export-Import Bank, the IMF, and US banks. Over half of the foreign exchange earned was used during the 1950s and 1960s to service the external debt. The strict economic controls enacted in 1967 helped curb the inflationary trend and thus stabilized the nation's economy. After a decline during the early 1970s because of the international financial crisis, Argentina registered a surplus between 1973 and 1979, but after 1981, the current account was in deficit because of heavy debt-servicing costs.

The US Central Intelligence Agency (CIA) reports that in 2001 the purchasing power parity of Argentina's exports was $26.7 billion while imports totaled $20.3 billion resulting in a trade surplus of $6.4 billion. In view of the liberalization of trade policies and the real appreciation of the peso, the current account deficit deteriorated sharply since 1990. This was more than offset by a large influx of foreign capital that was enticed by the government's new economic program. Since 1991, the decline in interest rates internationally and the lack of attractive alternatives for foreign direct investment helped to generate a massive inflow of foreign capital, much of which was actually owned by Argentines but held abroad. A debt restructuring plan in early 1993 permitted the investment of reserves by eliminating the threat of seizure. Nevertheless, Argentina's external public debt increased in 1995 to almost US $80 billion, due to new borrowing in capital markets and lending from international financial institutions. In 1998, external debt reached $133 billion.

The International Monetary Fund (IMF) reports that in 2001 Argentina had exports of goods totaling $26.6 billion and imports totaling $19.2 billion. The services credit totaled $4.3 billion and debit $8.40 billion. The following table summarizes Argentina's balance of payments as reported by the IMF for 2001 in millions of US dollars. 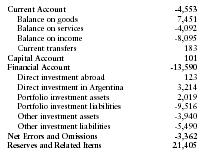