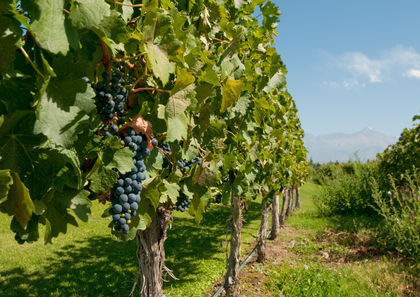 Agriculture and agro-industry in Argentina focus on the production of cereal, oil grains and seeds, sugar, fruit, wine, tea, tobacco, and cotton. Argentina is one of the greatest food-producing and food-exporting countries of the world, with an estimated 27,200,000 hectares (67,210,000 acres) of arable and permanent cropland. Agriculture and animal husbandry have traditionally supplied the nation with 70–95% of its export earnings, and the landowners have alternated the two activities in accordance with prices on the world market. As of 2001, agriculture made up 5% of the GDP. Agricultural products also accounted for 41% of exports by value. One of the most important factors in Argentine agriculture is the advanced degree of mechanization; in 1998, an estimated 280,000 tractors and 50,000 harvester-threshers were in use.

The principal agricultural region consists of the humid pampas, one of the world's greatest reaches of arable land. Argentine agriculture is virtually coextensive with this region, although efforts have been made to spread it into other areas. Citrus fruit, tobacco, cotton, and sugarcane are cultivated outside the pampas.

Wheat is the leading crop. Argentina accounted for about 75% of all wheat produced in South America in 1999 and was the world's fifth-leading wheat exporter. The area harvested in 1999 was estimated at 5.8 million hectares (14.3 million acres), and production at 14.5 million tons. Argentina is the fourth-largest corn-growing country in the world. The area harvested in 1999 was 2.5 million hectares (6.2 million acres), and production was 13.2 million tons. Barley is favored as the grain of greatest yield and resistance to disease; types for feed and beer are grown in the pampas areas having soil unfavorable or a climate too rigorous for wheat. Harvests once amounted to 659,000 tons per season in the early 1970s, but in 1999 production was 400,000 tons.

Rice is a major crop, with a 1999 production of 1,576,000 tons on plantings of 281,000 hectares (694,000 acres). Argentina is one of the world's biggest producers of flaxseed (linseed); production in 1999 was 85,000 tons, down more than 80% from the early 1990s. Most of the crop is exported in the form of linseed oil. The province of Tucumán dominates the sugar-raising industry, which dates from 1646; sugarcane production in 1999 was 19.4 million tons. To control overproduction, the government formed the National Sugar Co. in 1970 and forbade the construction of new sugar mills through the end of the decade.

This article is very matter-of-factly, I can tell that the author did their research well. And that he/she put a lot of work into it. I give my props to the author and hope that other people who know little about Argentina now know some of it, and that someday they will come to see the beauty of Argentina.
2
kazuya

what a great!!I like this airticle and I hope to be updated.Thank you for giving me such a super perfect information about argentina!
3
Shirley

I thought this paragraph was very resourcful. I found out about a lot of information that otherwise I wouldn't have known before.
4
Lux

this is a perfect article!! its useful and very detailed.
5
Andrea

Really helped with my scrapbook project! Thank you! you wrote this very well!
6
Mohammed Waseem

We are looking for wheat both for human and non human consumption for Pakistan.Are there any exporters for Pakistan.
7
nelida quesada

great articule and very helpful thank you!it has contribute with my report
8
Kevin

would like to know if there any interest in used Dairy Equipment from the United States.If there
is contact me, my email address is available.
9
Mia

heyyy it is a wonderful article
i luv it lol bye :)
10
natalie

LOVE THIS WEB SO COOL ITS SO DETAILED IT GIVES YOU MOST INFO. ABOUT THIS COUNTRY
11
JamesF

Thank you. Now we know what to avoid if they keep creating a problem with the Falklands.
12
matthew

i love this article. Its the best thing that has ever happened to me
13
Suma

This article helps me a lot for this project, thank you.
14
Emily

I loved this artical it helped me on muy project and I will tell the friend about this website. I will never forget Argentina and how the industry grew.
15
hailey

Its Help Me To Complete My Project No More Comment Thank you .