Antigua and Barbuda - Balance of payments

Inward capital movements, of which the largest part is foreign investment (especially for tourism-related construction), compensated for the imbalance in trade and services during the 1980s, but Antigua and Barbuda had until recent years maintained a consistently large trade deficit from heavy import dependence, in spite of growing tourism earnings.

The US Central Intelligence Agency (CIA) reports that in 2000 the purchasing power parity of Antigua and Barbuda's exports was $400 million while imports totaled $357 million resulting in a trade surplus of $43 million.

The International Monetary Fund (IMF) reports that in 2000 Antigua and Barbuda had exports of goods totaling $420 million and imports totaling $341 million. The services credit totaled $415 million and debit $164 million. The following table summarizes Antigua and Barbuda's balance of payments as reported by the IMF for 2000 in millions of US dollars. 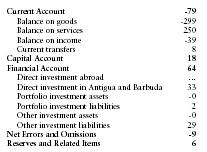