Zimbabwe derives its principal revenues from income taxes, sales tax, customs and excise duties, and interest, dividends, and profits. Principal categories of expenditure are education, defense, debt service, and agriculture. Budgets for the 1970s and the 1980s were generally in deficit. Escalating fiscal deficits in the 1980s led to the implementation early in 1991 of an extensive reform program, which focused on fiscal deficit reduction and monetary reforms. A severe drought in 1992, however, set back the program; the deficit rose to more than 10% of GDP in 1993, and 15% of GDP in 2000. In 1999, an estimated one-third of the total budget was spent on troops sent to the Congo. Pay rises from 60% up to 90% were given to the civil service and the army, and he gave himself an even bigger raise.

The US Central Intelligence Agency (CIA) estimates that in 2000 Zimbabwe's central government took in revenues of approximately $2.5 billion and had expenditures of $2.6 billion. Overall, the government registered a deficit of approximately $100 million. External debt totaled $5 billion. 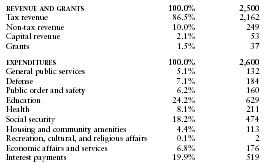