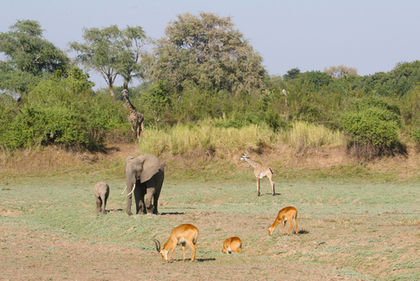 Although Zambia lies within the tropics, much of it has a pleasant climate because of the altitude. Temperatures are highest in the valleys of the Zambezi, Luangwa, and Kafue and by the shores of Lakes Tanganyika, Mweru, and Bangweulu.

There are wide seasonal variations in temperature and rainfall. October is the hottest month. The main rainy season starts in mid-November, with heavy tropical storms lasting well into April. The northern and northwestern provinces have an annual rainfall of about 125 cm (50 in), while areas in the far south have as little as 75 cm (30 in). May to mid-August is the cool season, after which temperatures rise rapidly. September is very dry.

thanks for the help on the Zambia climat, cause it has helped me with my geograghpy home on ledc countries... thanks again Genny rose
2
Shanna Moore

Thanks for this information! :) It rly helped me with my geography project
3
maggie

gee, this whole website has been such a great help in giving information for EVERY COUNTRY in africa. its helped me a lot for my elective geography homework! thanks guys ;)
4
lilly

thanks so much its such good help..
but really to much information witch is good :)
5
lauren

what is the average rainfal for Zambia? and possibly the sunlight and temperature? i need to know for a geography assigment
thanks :)
6
Tiana Lopez

YAY!!! Now i can finish my World Studies Project!
Thanks
8
Sally

WOW thanx this helped alot now i can finish my project :)
9
colby florkewicz

this was very helpful for my social studies project! :D
10
Jordan

Thanks for posting this, I was lacking in some information on Zambia. This really helped with my Geography project.
11
careen mutembo

good summary based on average Zambian climate.any changes observed lately? if so what are the?how does the indian ocean affect the temperatures in zambia?
12
alissa

It is wonderfulto be here, thank you for all reading this posting. What a great honour!

I have been to Durban.
14
Mathew

what has been the trend in terms of average temperature for Lusaka for the past 10years? I just want to know if the effects of global warming are manifesting here too.
15
Mathew

what has been the trend in terms of average temperature for Lusaka for the past 10years? I just want to know if the effects of global warming are manifesting here too.
16
Chris

Thanks this website has helped a lot with my geo assignment.
:)
18
FUDGE THE HIPPO