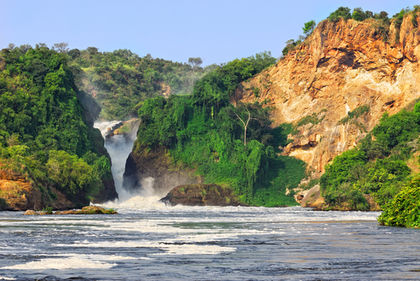 Uganda's economy is agriculture based, with agriculture employing over 80% of the population and generating 90% of export earnings. Coffee is the main export crop, with tea and cotton other agricultural products. Uganda also has mineral deposits of copper and cobalt, which contributed 30% of export earnings during the 1960s, although the mining sector is now only a minor contributor to the economy.

The upheavals of the 1970s and the troubles of the 1980s left the economy in disarray. However, economic reforms begun in 1986 have resulted in important progress. The government made significant strides in liberalizing markets and releasing government influence during the 1990s, although some administrative controls remained in 2003. Monopolies were abolished in the coffee, cotton, power generation, and telecommunications sectors and restrictions on foreign exchange were removed. Reforms improved the economy and gained the confidence of international lending agencies.

The economy has posted growth rates in the GDP averaging6.9% from 1988–98, and 6% from 1998–2003. Consequently, the economy has almost doubled. Still, Uganda is one of the poorest countries in the world heavily dependent on foreign aid (approximately 55% of government spending in 1998). High growth rates are necessary to balance the population growth rate of over 3%. The government in 2003 was known for its sound fiscal management. World coffee prices recovered in 2003, which brought in revenue. New property developments have been fueled by an influx of foreign investment, which has provided testimony of confidence in Uganda's economy. Ugandan Asians, who had been expelled by Idi Amin in 1972, have had their property restored and have brought business back into the country. One of the first African nations hit by HIV/AIDS, Uganda had by 2003 witnessed a drop in infection rates over the previous decade. However, Uganda's continued involvement in the civil war in the Democratic Republic of the Congo compromised the progress Uganda has made on many other fronts.

dude this was a big help thanks.......who wrote this i would like to know more...i used this for intro to business....thanks for your help byes
2
andrea

hey.. whoever wrote this helped me a lot on my geography project! thanks!
3
Rachel

Hey, this was helpful for my World Cultures project.

I just have one question--
Does Uganda overall have a strong economy??
4
rothy

this helped me a lot on my geography project, its really helpful!! thank you whoever wrote it
6
Jesse

this information helped me with my History research paper pertaining to Uganda in the 1970's ending in the 1990's
I did feel it was a little incomplete...although it is exactly in my time restrictions I think there could have been more information to give about Ugandans economy. Thanks though, it did help me alot
7
will

this helped me alot with my uganda project. i did three paragraphs with this information, thanks
8
Sammy H

I am really happy with the info provided coz it has helped me alot in knowing about Ug's economy, Salutes go whoever took part in writing this artical. THANK YOU
10
bethany

i used this for my schoo, project. it was a big help. thanks.
11
Tessa

this is great information.
i'm using it on my world studies project right now:D
thanks!
12
jono

this sight in a whole is really useful for economics so thanks to whoever wrote it, seriously ur a champ!
13
Mafaz

this is very much useful in my work ..yes it helped me a lot on preparing a country review for a investment proposal.
14
Just A Friend

Thanks. :) I need this to help me. My class is learning a bit about Uganda and we're involved in this group helping Uganda.
15
colton pittman

haha thanks 4 the info. needed it for s.s. project. thanks

wow. this rocks. im doing a lecture for french global history in two weeks and i needed a topic i could find info about. this was perfect. thank you...
17
kas

this website helped me tons on my geography project THANKS!!
18
Mandeep Singh

The information has meaning but its very brief, we need more information. Well done whoever put it down.
20
Thatguy

Thanks! Helped me a ton! I'm doing a project in economics and this had great information. Thanks again!
21
patrick

Uganda has abundant resources raging from oil,water resources,Agriculture,forest and a good climate but policy disability and lack of institutionalization is what makes Uganda poor.let not brag
22
Kayla McElligott

wow the first site i've seen that just got right to the point..thank you so much!
23
samuel

This is great. because it informs most Ugandans reading it but then some how biased its not looking at the emerging fiscal indiscipline more especially in recent years from 2006 where non productive activities like security and defense, elections, are being prioritized and productive activities say agriculture taking the smallest share of the budget ie less than 5% of the national budget. talk about the corruption issues of chogm, temangalo, members of parliament 20 million with out accountability all causing concentration of the economy and drainage of money. this has led to increased money supply in the economy which is not backed by the national production capacity causing a gap between demand and supply (much money chasing few commodities). this has recently manifested its self into persistent increasing prices(inflation) headline inflation recorded increasing from from 11.1% in march 2011 to approximately 16% in June 2011. A ware of this , caused walk to work where many were killed while others injured. overwhelmingly patient Ugandans the problem prolonged causing over depreciation of Ugandan currency from $1=2350 shs in March 2011 to approximately $1= 2700shsin mid June 2011 relation to a dollar which has a great impact on importation as importers will need more shillings to buy one dollar. this caused injection of approximately 20 Million dollars to stablise the economy and resulted to business close down in Kampala early July(6th July)
24
D'Imortal J. I. P.

This site is worthy appreciating but the authors and writer should only update this site. I used this site for my Postgraduate research and l got the necessary information Thanks lets keep the spirit of reading and research.

For God and my Country
26
Davidie

This note is very great,it has helped me to know more about uganda
27
barbra

Great thanks goes to you all for the great information about our economy.l really appreciate because it provides us with information that will help us realise how much agriculture helps us.
28
micka

this was real helpful for my geography project, which is gonna be marked as part of my end of year course work. thanks a bunch to who ever wrote this! :)
29
kyle

7th grade powerpoint... nailed it.
lots of thanks to whoever wrote this,
but i wish i knew who did
30
Shayla

Thanks : ) For Giving Me This Information . I Really Needed It For A Project .
31
Nsubuga jimmy

i thank God that we can all realize how blessed our country is. however i would be happy if at this time we finance our own budget. Because the more we depend on aid the more we cannot exploit the redundant resources and the more increased chances of having corrupt officials.
33
paul

this wsa of an important use for my reaserch paper. keep it up thanks
34
mugerwa joseph

such information is relevant to me as atudent doing economics. thanks alot