Each year, an administrative budget and a development budget are submitted to the National Assembly. Levies on imports provide the major sources of current revenue, but trade agreements with the WTO and the EU will disturb this pattern. Government spending amounted to about half of GDP in 1999, 60% of which was spent on social projects. The Tunisian government's economic reform programs are lauded as some of the best in the world by international financial institutions. Reforms included liberalized prices, reduced tariffs, and lowered debt-to-GDP ratios. Since the privatization program was launched in 1987, about 140 state-owned enterprises had been fully or partially privatized as of 2002. 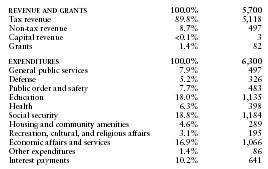