The fiscal year extends from 1 July to 30 June. In the 1980s, expansionary fiscal policies exacerbated a weakening economy; by 1985, the budget deficit reached 30% of GDP. An economic recovery program was initiated to reduce public expenditures, diversify the agricultural sector, and privatize the parastatal sector. This step preceded the 1988 agreement with the IMF for a structural adjustment program which helped the economy grow at an annual rate of 4% between 1990 and 1993. 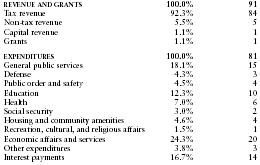 Also read article about The Gambia from Wikipedia