Archeological evidence in the form of stone axes and broken pottery points to the existence of early habitation in the Gambia River region around 2000 BC In 470 BC , Carthaginian sailors visited the River Gambia. Hannon the Carthaginian referred to The Gambia in his writings, making The Gambia known to the outside world. In AD 300, West African trading networks expanded as early empires established trading networks for peoples living in the Gambia River area. Later kingdoms of the Foni, Kombo, Sine-Salom and Fulladou in The Gambia became trading partners of West Africa's great empires. Islam reached the Ghana Empire in the early 8th century, following the Arab conquest of North Africa.

Around AD 750, at Wassu, a large concentration of stone pillars was placed on the north bank of the River Gambia, the largest of which weigh about ten tons and stand about eight and a half feet above the ground. The stones likely mark the burial sites of kings and chiefs similar to burial grounds of royalty in the Ghana Empire. In the 11th century, Islamic leaders (Karamos) were buried like this, making some of the circles holy places.

Eastern Gambia was part of the great West African empires that flourished for a millennium beginning with Ghana after AD 300. The relative political stability guaranteed by the empires permitted trade and movement of peoples throughout the region. Powerful kingdoms organized as families and clans of Wolof, Mandingo, and Fulbe (Fulani) peoples formed larger social and political units. Small groups of Mandingos had settled in The Gambia by the 12th or 13th century, and a Mali-based Mandingo empire was dominant in the 13th and 14th centuries.

Portuguese sailors discovered the Gambia River in 1455; its navigability made it uniquely important for European traders seeking to penetrate the interior. In 1587, English merchants began to trade in the area. The Royal African Company acquired a charter in 1678 and established a fort on James Island, a small island in the river estuary. In 1765, the forts and settlements in The Gambia were placed under the control of the crown, and for the next 18 years The Gambia formed part of the British colony of Senegambia, with headquarters at Saint-Louis. In 1783, the greater part of Senegambia was handed back to France; the Gambia section ceased to be a British colony and was returned to the Royal African Company.

In 1816, Capt. Alexander Grant entered into a treaty with the chief of Kombo for the cession of Banjul Island. He renamed it St. Mary's Island and established on it a settlement that he called Bathurst (now Banjul). In 1821, the British settlements in The Gambia were placed under the administration of the government of Sierra Leone. This arrangement continued until 1888, except for the period 1843–66, when The Gambia had its own colonial administration. In 1888, The Gambia again became a separate colony. Its boundaries were defined following an agreement with France in 1889.

After 1888, The Gambia was administered by a governor assisted by an Executive Council and a Legislative Council. In 1902, St. Mary's Island was established as a crown colony, while the rest of the territory became a protectorate. In 1960, universal adult suffrage was introduced in the protectorate, and a 34-member House of Representatives replaced the Legislative Council. The office of prime minister was created in 1962, and the Executive Council was reconstituted to include the governor as chairman, the prime minister, and eight other ministers. Dr. (later Sir) Dawda Kairaba Jawara, the leader of the Progressive People's Party (PPP), became the first prime minister. The Gambia attained full internal self-government on 4 October 1963, with Jawara as prime minister. An independence constitution, which came into force in February 1965, established The Gambia as a constitutional monarchy within the Commonwealth. 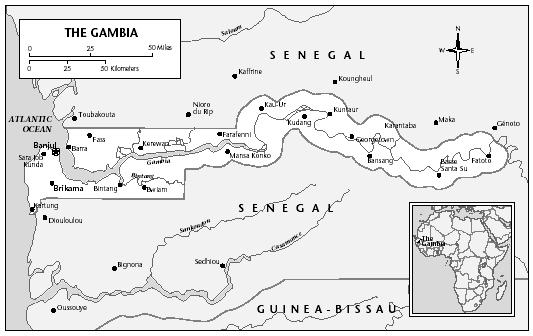 On 23 April 1970, after a referendum, The Gambia became a republic with Jawara as the first president. He and the ruling PPP remained in power into the 1980s, weathering an attempted left-wing coup and paramilitary rebellion in July 1981, which was quashed by Senegalese troops under a mutual defense pact signed in 1965; an estimated 500–800 people died in the uprising, and there was much property damage. In February 1982, the Confederation of Senegambia was formally constituted. Jawara was reelected to a new term as president that May, receiving 72.4% of the vote. He was reelected in March 1987, defeating two opponents with 59.2% of the vote, and again in April, 1992. He gained 59% of the vote to 22% for Sheriff Mustapha Dibba, his nearest of four rivals. His PPP was also returned to legislative power but with a reduced majority. It fell from 31 to 25 of the elected seats, in the 36-seat House of Representatives.

In March 1992 Jawara accused Libya of arming a force led by Samba Samyang, the leader of the 1981 coup attempt. Libya denied involvement. He also made similar accusations against Libya and Burkina Faso in 1988. In May 1992 Jawara announced an amnesty for most members of the Movement for Justice in Africa (MOJA) which had been linked to the failed 1981 coup. And in April 1993, two of MOJA's leaders returned from exile to organize as a political party.

Jawara was expected to retire in midterm, but on 22 July 1994 he was overthrown in a bloodless military coup led by Lt. Yahya Jammeh, who had studied in the United States and held an honorary post in the Alabama National Guard. President Jawara took shelter in an American warship which, at the time, had been on a courtesy call. The junta of junior officers and a few civilians suspended the constitution, banned all political activity, detained its superior officers, and placed ministers of the former government under house arrest. The European Union and the United States suspended aid and pressed for a quick return to civilian rule. In 1995, Vice-President Sana Sebally attempted another coup, ostensibly to return civilian rule, but it failed. Isolated from the West, Jammeh sought diplomatic ties with other marginalized nations. In 1994, he established relations with Libya and, in 1995, he did so with Taiwan (incurring China's wrath and a break in relations). Economic accords were signed with Cuba and Iran as well.

On 26 September 1996, presidential elections were held in which Jammeh won 55.76% of the vote. Ousainou Darboe took 35.8% and Amath Bah won 5.8%. Three former contenders, the PPP, The Gambia People's Party and the National Convention Party, blamed for The Gambia's problems, were proscribed from competition. Two days later, Jammeh dissolved the Armed Forces Provisional Ruling Council, which he had formed upon taking power in 1994, and called for legislative elections in January 1997. The Alliance for Patriotic Reorientation and Construction won 32 of 45 contested seats (4 of the body's 49 are appointive). The elections were considered to have been relatively fair, although opposition candidates were harassed and there was almost no media exposure of any but the ruling party.

In 1998, tourism, the most important source of foreign currency, had risen to near pre-coup levels as Jammeh suppressed grumbling in the army, reestablished stability, and allowed some democratic reforms to move ahead. In February 1998, Jammeh made his first official visit to France. He signed a technical, cultural and scientific accord in Paris designed to reinforce Franco-Gambian cooperation. In 1999, Jammeh raised The Gambia's international profile by mediating between Casamance rebels and the Senegalese government. The ADB, OPEC, and the Islamic Bank approved a round of loans and credits for building and equipping schools and hospitals, and the IMF agreed to a second annual loan worth $11.8 million under the ESAF.

However, in March 2000 the government was reeling from accusations of embezzlement of some $2–$3 million of Nigerian oil aid, the siphoning off of millions of dollars of a Taiwanese loan, and money laundering in connection with the privately held peanut processing and marketing company, Gambian Groundnut Corporation (GGC). The government stepped up security measures and controls over the private media, which it justified on the grounds of an alleged coup attempt on 15 January 2000. The coup may have been stage-managed as a pretext for increased security measures. In mid-April, student protests ended with the deaths of 14 people. Local elections, scheduled for November 2000 were repeatedly postponed.

The 18 October 2001 presidential elections were conducted amidst charges of fraud, and thousands of Diola—members of Jammeh's ethnic group living across the border in Senegal— reportedly helped re-elect Jammeh who took 52.96% of the vote. Ousainou Darboe of the United Democratic Party (UDP), who had formed a coalition with the People's Progressive Party (PPP) and with The Gambia People's Party (GPP) of Hassan Musa Camara, came in second. Despite his allegations of voting and identity card fraud, Darboe conceded defeat. The EU, the Commonwealth, the UK, the UN, and Transparency International observers said they were relatively satisfied with the conduct of the election.

In 1999, the HIV/AIDS adult prevalence rate was estimated to be below 2%, one of the lowest rates in sub-Saharan Africa. The 2002 UN Human Development Report ranked The Gambia 160th out of 173 countries on the basis of real GDP per capita, adult literacy, and life expectancy.

Also read article about The Gambia from Wikipedia