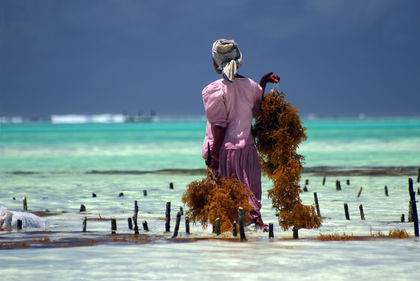 The population of Tanzania in 2003 was estimated by the United Nations at 36,977,000, which placed it as number 32 in population among the 193 nations of the world. In that year approximately 3% of the population was over 65 years of age, with another 45% of the population under 15 years of age. There were 98 males for every 100 females in the country in 2003. According to the UN, the annual population growth rate for 2000–2005 is 1.4%, with the projected population for the year 2015 at 57,800,000. The population density in 2002 was 39 per sq km (102 per sq mi). The most densely populated regions are the well-watered or elevated areas, particularly in the Usambara Mountains, around Kilimanjaro and Meru, on the shores of Lake Victoria, in the Southern Highlands, and in the coastal areas around Tanga and Dar es Salaam.

It was estimated by the Population Reference Bureau that 33% of the population lived in urban areas in 2001. The capital city and largest urban area, Dar es Salaam, had a 2002 population of 264,000. Other large cities include Dodoma, Zanzibar, Mwanza, and Tanga. According to the United Nations, the urban population growth rate for 2000–2005 was 5.4%.

The prevalence of AIDS/HIV has had a significant impact on the population of Tanzania. The United Nations estimated that7.8% of adults between the ages of 15–49 were living with HIV/AIDS in 2001. The AIDS epidemic causes higher death and infant mortality rates, and lowers life expectancy.

definitely. geog project was a hell of a lot easier with this :D
3
Uyabongeka Nhlumayo

this website helped me alot wit my writing :) :D thanks
6
fjutouh

this website has helped me a lot in finding of the Data i was eager to know about my Country.thanks a lot,goodwork done here,ill be visiting regulary.
7
Tumpale Luhanga

Thank very much God bless you. This website helped me in many ways of studing. I had a lot of material studing throuth this website. Be blessed to my God.
9
Raymond M,chani

Thanks for this academic information,,just to add one one thing,,please provide some more alternative website regarding HIV and CANCER affected patients in Tanzania
10
ELROY

THANKS to this website, so i be able to do my task.
11
Elle

Great website, many thanks this made my homework a lot easier :-)
13
mario Nyakiha

This web has helped me alot with my seminar presentation on developmental studies, thank you
14
Florentina Majura

This page help me to accomplish my population policy assignment. Thanks
15
joel maduhu

this is a good/recent info that helped in my elective study to know the new population growth especially in mwanza region.
16
Grace Simba

What is the family reproductive rate for the past 10years??
17
Emanuel Nchama

I apppreciate the content since it assisted me in accomplishing my papper on population.
19
Saumu Kumbisaga

Thanx 4 nice article, it so good and brief so as any one can understand keep it up
20
Pol

According to the statistics of Tanzania,is Tanzania overpopulated or underpopulated?
21
saleh zahran

if AIDS/HIV 2001 was 7.8% how about today? ppo can u imagine on the spreading of such diseases? prevent u 2 prevent them. thanks! by udom student- makali,g.s
24
singo

i wanna know the population size of dar-es-salaam in 2000, the income class and finally GNP in PPP basing on the same year because i couldn't find it on web. Thnxs so far the page is helpfully.
25
Michael CtM Mhando