In the past, the government maintained a prudent fiscal policy by avoiding large deficits and restricting public sector growth. From 1987 to 1991, large budgetary surpluses were registered, and the government began making repayments on the external debt as a net creditor to the bank. Budgetary deficits during the 1990s reflected extravagant government spending on the monarchy and his family. The civil service was overstaffed as well, prompting a reduction of 5,000 employees in 2000. South African Customs Union receipts accounted for 54% of government revenue in 1999, while income tax contributed about 25% (half corporate, half personal). 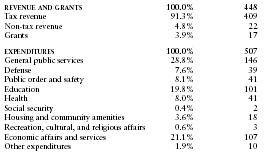