A decline in long-term capital inflows, increasing government deficits, and a drop in donor assistance plagued Swaziland with a current account deficit for much of the 1990s. The goods and services account has been negative since the 1980s. Payments made by the Southern African Customs Union (SACU) to Swaziland, along with donor assistance, have offset this deficit, but these sources of revenue are threatened. Increased government deficits have also weakened the position of the current account.

The US Central Intelligence Agency (CIA) reports that in 2001 the purchasing power parity of Swaziland's exports was $702 million while imports totaled $850 million resulting in a trade deficit of $148 million.

The International Monetary Fund (IMF) reports that in 2001 Swaziland had exports of goods totaling $809 million and imports totaling $882 million. The services credit totaled $85 million and debit $179 million. The following table summarizes Swaziland's balance of payments as reported by the IMF for 2001 in millions of US dollars. 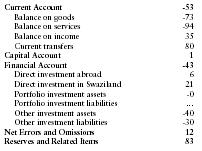