Sudan's budgets were in deficit from the 1960s through the 1990s. The budget deficit soared to 22% of GDP in 1991/92, which aggravated inflation. As of 2000, neither the budget deficit nor inflation showed signs of shrinking as civil war disturbs commerce, trade, and aid. 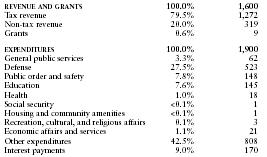