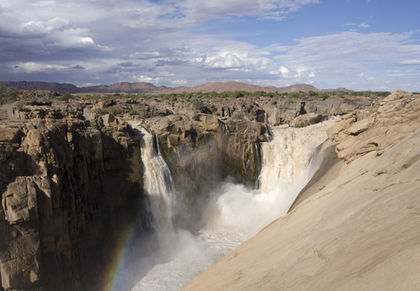 Recent industrialization and urbanization have taken their toll on the South African environment, as have such agricultural practices as veld fires, overgrazing of livestock, and intensive use of pesticides. Soil erosion and desertification are two more significant environmental issues in South Africa. Three hundred to four hundred million tons of soil per year are lost. The country's limited water resources have been impaired by mineralization, eutrophication, and acidic mine drainage. South Africa has 44.8 cubic kilometers of renewable water resources, with 72% used for farming and 11% for industrial activity. The country's cities produce about 4.2 million tons of solid waste per year. Air pollution in urban areas stems primarily from coal burning and motor vehicle exhausts.

As of 2001, 33 mammal species and 16 bird species were endangered. Plant species numbering 1,875 were also endangered. Endangered species in South Africa include the riverine rabbit, Cape Mountain zebra, Treur River barb, and several species of butterfly. Twelve species have become extinct, including the cape warthog, bluebuck, Burchell's zebra, and quagga. About 5.4% of the total land area is protected and there are numerous nature and game reserves and national parks. Some 120 rare Addo elephants are protected in Addo Elephant National Park, 56 km (35 mi) north of Port Elizabeth; Bontebok National Park (near Swellendam, Cape Province) is a habitat for the last surviving herd of bontebok antelope; Mountain Zebra National Park (near Cradock, in Cape Province) is a refuge for several hundred rare mountain zebras and springbok; and Kruger National Park, in northeastern Transvaal, has almost every species of South African wildlife in its natural habitat.

Have been read the article above,i think we should also look principles regardind what can be done by a society to alliviate the exploitation of the environment for us to preserve it fo the future generation
2
jamye

thank you so much for helping me understand this better. you have no idea how much this helped
3
Skylar Dangerfield

This article is helpful because many students doing a research project on South Africa can easily find what they need in this article.