The government of Sierra Leone has been prevented from having any significant economic influence in the country thanks to a shortage of foreign exchange, deep-seated corruption, and uncertainty surrounding the civil wars that periodically take place. The minister of finance came under attack in 2000 for declaring expenditures reaching $30,000 on the war during the month of May alone, because government officials reportedly siphoned off money into private bank accounts. Payroll fraud in the same year to the tune of $400,00 in the accounting office also took a toll on government respectability.

The US Central Intelligence Agency (CIA) estimates that in 2000 Sierra Leone's central government took in revenues of approximately $96 million and had expenditures of $351 million. Overall, the government registered a deficit of approximately $255 million. External debt totaled $1.3 billion. 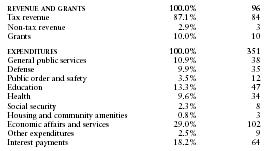