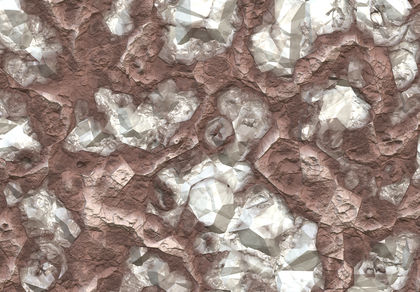 The artisanal mining of diamonds was Sierra Leone's leading industry in 2002, and diamonds and rutile were the top export commodities. Artisanal recovery of gold was another important mineral output, and petroleum refining was the country's fourth-leading industry. Before rebel activities disrupted diamond mining in 1992, and bauxite and rutile operations in 1994–95, the mineral industry accounted for an estimated 15%–20% of GDP and 90% of export earnings, and employed one-half of the labor force. Although civil strife has adversely affected investment in natural resource development since 1995, conditions were expected to improve with the declaration that war had ended in 2001.

Diamond output was 600,000 carats in 1999, 2000, and 2001, 250,000 in 1998, and 400,000 in 1997; most production was by artisanal miners. It was believed that a substantial portion of the diamonds close to the earth's surface was smuggled out of the country. Alluvial diamonds, first discovered in Kono District in 1930, were widely scattered over a large area, but particularly along the upper Sewa River. The main diamond deposits were the Koidu and Tongo fields. Diamond Works Ltd., of Canada, which owned 60% of the Koidu mine (reserves of 2.67 million carats), announced in 2001 that it was returning to Sierra Leone. Diamond Works also held diamond exploration licenses on the Sewa River with reserves containing 1.7 million carats. Production of alluvial gold in 2001 was 30 kg, down from 123 kg in 1994.

For 25 years, the Sierra Leone Selection Trust (SLST), a subsidiary of the Consolidated African Selection Trust, had exclusive diamond prospecting rights and gave the government 27.5% of its annual net profit. However, this monopoly, plus numerous finds of gem diamonds at or close to the surface, encouraged so much illicit mining and exportation, that, in 1955, the government renegotiated SLST's concession, limiting it to two areas, Yengema, in Kono District, and Tongo, in Kenema District, and compensated the company for surrendering its rights in other areas. In 1956, the government introduced the Alluvial Diamond Mining Scheme, in which Sierra Leoneans were issued licenses to dig in declared areas totaling more than 23,300 sq km (9,000 sq mi). In addition to a licensing fee, each licensee had to pay land rental to the local chiefdom authorities and could employ up to 20 diggers. A buying organization, the Government Diamond Office (the Government Gold and Diamond Office since 1985), was set up in agreement with the Diamond Corp., in London. Foreigners, who had figured significantly in illicit diamond dealing, were removed from the diamond-mining areas. In 1962, the government ordered the SLST to sell all its diamond through the government office. In 1970, the government acquired a 51% interest in SLST and formed the National Diamond Mining Co. (NDM). In 1991, the government started returning control of diamond and gold export activities back to the private sector, to curtail illicit trading and maximize revenues. New mining policy in 1994 made requirements for licensing miners and exporters more rigid, to address the heavy revenue losses from illegal trading in diamonds and gold. NDM ceased operations in 1992, partly because of rebel activities in the Yengema mining district.

Sierra Rutile Ltd. announced that rutile mining would resume in 2003, having closed in 1995 because of fighting. The Sierra Rutile mine was the largest and highest-grade rutile resource in the world. Mining of rutile, a titanium oxide, began in the Southern Province, near Bonthe, in 1967; because of technical difficulties, mining operations were stopped in 1971. Sierra Rutile began operating a pilot plant in 1973, and production resumed in December 1979. Output rose from 46,000 tons in 1980–81 to a record 154,000 in 1991, before falling to 137,000 in 1994.

The main iron ore deposits were near Marampa, in the Port Loko District, and between the Sokoya and Waka hills, in the Tonkolili District. Mining began in 1933, and a program of expansion of the Marampa mine was launched in 1961. Exports increased from 952,000 tons in 1960 to 2.4 million tons in 1973, but the mine was closed in 1975. It reopened in 1982, under government ownership and Austrian management, shipment of iron ore resumed in 1983, and the mine was closed again in 1985.

Bauxite mining in the Mokanji Hills area of the Southern Province was begun by the Sierra Leone Ore and Metal Co. in 1963. Production of 735,000 tons was reported in 1994, before operations were disrupted by civil unrest. In 1996, the company announced that it would not reopen the site. A second bauxite operation and alumina plant were to be developed at Port Loko. A zircon recovery plant opened in 1991, using old tailings and new mine output from the rutile mines. Known reserves of other minerals included antimony, cassiterite, columbite, corundum, fluorspar, ilmenite, lead, lignite, magnetite, molybdenum, monazite, platinum, silver, tantalite, tin, titanium, tungsten, and zinc.

A 1999 amendment to the 1994 Mines and Minerals Act introduced procedures for sale and export of precious minerals by license holders, and penalties for unlawful possession or smuggling of precious minerals. In 2001, Sierra Leone and Angola introduced a diamond certification scheme in response to UN sanctions aimed at prohibiting importation of diamonds from rebel-controlled areas in the countries.