Annual budgets of increasing deficits were common in the 1980s. The public sector is responsible for two-thirds of Seychelles' employment, and the budget amounts to about 40% of GDP. Public investment focuses on social and physical infrastructure, tourism, and export activities. Some privatization has occurred in recent years, including the privatization of some port operations and the Seychelles Tuna Canning Factory, 60% of which was purchased by Heinz.

The US Central Intelligence Agency (CIA) estimates that in 1998 Seychelles's central government took in revenues of approximately $249 million and had expenditures of $262 million. Overall, the government registered a deficit of approximately $13 million. External debt totaled $240 million. 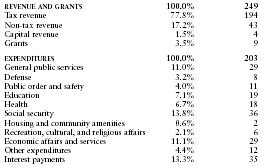