Senegal has 906 km (562 mi) of railroads, all owned by the government. The main lines run from Dakar to Thiès and thence to Kidira on the Mali border, and from Thiès to Saint-Louis. There are also branch lines from Guinguineo to Kaolack, from Louga to Linguère, and from Diourbel to Touba, serving the peanut-growing areas. Of Senegal's estimated 14,576 km (9,058 mi) of classified roads in 1999, some 4,271 km (2,654 mi) were tarred. There are modern roads from Dakar to Thiès, Saint-Louis, and Matam, and from Dakar to Kaolack and on through the Gambia to Ziguinchor in Casamance. In 2000, there were 70,700 passenger cars and 68,800 commercial vehicles in the combined territory, Senegambia.

Favorably located at the westernmost point of the continent and possessing up-to-date equipment, Dakar is one of the largest deepwater seaports on the West African coast, a major import-export center and a port of call for freight and passenger ships. The port can accommodate ships of up to 100,000 tons. The Senegalese Maritime Navigation Co. (Compagnie Sénégalaise de Navigation Maritime—COSENAM), a river and ocean freight transport line in which the government has an 84% share, was founded in 1979. Gross weight of the single merchant vessel in 1998 came to 1,995 GRT. However, by 2002 there was no Senegalese merchant marine.

The Senegal River, which has a sandbar across its mouth, is navigable by shallow-draft vessels all year round from Saint-Louis to Podor (225 km/140 mi), and between August and October as far as Kayes in Mali (924 km/574 mi). It is closed to foreign ships. The Saloum is navigable by oceangoing vessels to the important peanut port of Kaolack, 114 km (71 mi) upriver. The Casamance River is navigable to Ziguinchor, although not without difficulty.

In 2001 there were 20 airports in Senegal, 9 of which were paved. Dakar's Yoff International Airport, a West African air center, is served by many foreign airlines. Air France, Air Senegal, and Air Afrique maintain routes connecting Saint-Louis, Thiès, Ziguinchor, Kédougou, Tambacounda, and 10 other towns with secondary air fields. Air Senegal is 50% owned by the government and 40% by Air Afrique, in which Senegal also holds a 7% share. In 2001, 5,500 passengers were carried on scheduled domestic and international flights. 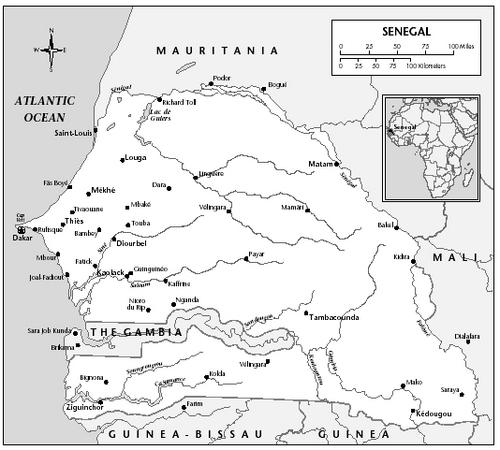 Dear Sir,
Kindly Provide me with a list of transportaton companies In Senegal.

Please kindly send me the depth and width of Kaolack river, navigable distance for a ship of 3m draft, discharging facilities for Bulk cargo like Basalt and the viability of using the river compare to using the road transport to Banjul - The Gambia.