Historically, São Tomé and Príncipe received a substantial flow of what was allegedly temporary immigration in the form of contract labor. The serviçais , as they were called, came largely 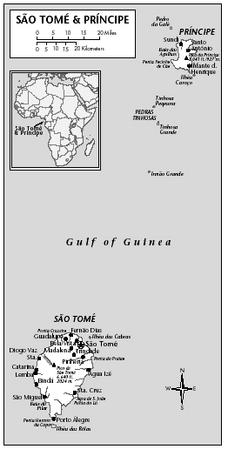 from Angola and Mozambique to work on the cocoa plantations; many were never repatriated. More recently, plantation labor has come from drought-stricken Cape Verde. Before 1974, Cape Verdeans were subsidized by the Portuguese government to settle on São Tomé and Príncipe in an effort to boost the islands' plantation economy. After the April 1974 revolution in Portugal and the coming of independence to the Portuguese territories, almost all the 3,000–4,000 European settlers left, while several hundred Angolans fled to São Tomé. Subsequently, more than 10,000 São Toméan exiles returned from Angola, and most Cape Verdeans left São Tomé. In 1999, the net migration rate was -3.88 migrants per 1,000 population. In 2000 the number of migrants totaled 7,000. the government views the migration levels as satisfactory.

Also read article about São Tomé and Príncipe from Wikipedia