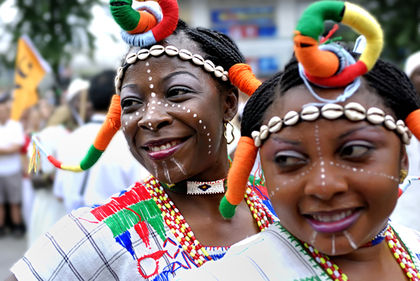 Both the suspended 1979 constitution and the never implemented 1989 constitutions, as well as the new constitution promulgated on May 29, 1999 provide for an independent judiciary. In practice, the judiciary is subject to executive and legislative branch pressure, influence by political leaders at both the state and federal levels, and suffers from corruption and inefficiency.

Under the 1999 constitution, the regular court system comprises federal and state trial courts, state appeals courts, the Federal Court of Appeal, the Federal Supreme Court, and Shari'ah (Islamic) and customary (traditional) courts of appeal for each state and for the federal capital territory of Abuja. Courts of the first instance include magistrate or district courts, customary or traditional courts, Shari'ah courts, and for some specified cases, the state high courts. In principle, customary and Shari'ah courts have jurisdiction only if both plaintiff and defendant agree, but fear of legal costs, delays, and distance to alternative venues encourage many litigants to choose these courts.

Trials in the regular court system are public and generally respect constitutionally protected individual rights, including a presumption of innocence, the right to be present, to confront witnesses, to present evidence, and to be represented by legal counsel. However, low compensation for judges, understaffing, poor equipment, bribery, special settlements, and a host of developmental factors decrease the reliability and impartiality of the courts.

Under the Abubakar Government, military tribunals continued to operate outside the constitutional court system, but they were used less and less frequently as military rule waned; the tribunals officially were disbanded by the implementation of the new constitution and the return to civilian rule. The tribunals had in the past been used to try both military personnel and civilians accused of various crimes, but groups asserted that these tribunals failed to meet internationally accepted standards for fair trial.

In October 1999, the governor of Zamfara signed into law two bills passed by the state legislature aimed at instituting Shari'ah law in the state. As a result, school children are now being segregated by sex in Zamfara schools, some public transportation, and some health facilities. There were fears among non-Muslims that despite legal provisions, women and other groups would be subjected to discrimination in Shari'ah courts. As of early 2003, eleven other northern states had adopted various forms or adaptations of Shari'ah law, including: Sokoto, Kebbi, Niger, Kano, Katsiana, Kaduna, Jigawa, Yobe, Bauchi, Borno, and Gombe. Some of these states have already issued sentences of public caning for consumption of alcohol, amputations for stealing, and death by stoning for committing adultery.

I must confess,this is a good right up from whoever must have compiled this.I will like to know more about all these.since Nigeria is my country,i take great delight in everything i see or hear about it.
2
akintola shola olumide

this is great.more power to the elbow of the writer.
3
balogun jimoh olawale

the writer has done enormous justice to the doubtable and easily mystified individuals that finds it somewhat difficult to accept the fact that law is unarguarbly in existence in nigeria.keep on the good job,'you are a tree in the middle of an ocean,you need no more water to survive'.kudos.
4
OBASI FRANKLIN UZOMA

This is intresting! this page has helped me in compiling my project, it is of a great reference.
5
Aderibigbe Rasheed Oriyomi

It was very nice and intresting. by now, i think people will now know what Nigeria Judicial system or precedent is and also about the Nigerian Court System. More kudus to the writer... Kindly explain better to me the doctries of equity.
6
milkiyas bulcha

It is extremely excellent ,it is relevant for me ,may God belles you!!!
I want know Nigerian court experience in the inter relation ship between Nigeria federal court and regions(state).please help me!on the issue of cassation proceeding in nigeria,is the regional adjudication power can be seen in federal cassation bench?
7
Idrisu mamud

Explanation of the fact of judicial precedent that is a source of law in Nigeria and with relevant authorities, explain how it is recognise in Nigeria court.
8
mathew onewe

It's unfortunate that a divers society like ours should go adopting a law that restrict some of it's citizens from their fundamental rights.
10
Marlowe Camello

I believe discrimination in justice in Nigeria can be prevented if it will only adopt the U.S. Federal Jury system that both includes the Grand Jury and Trial Jury Systems. The fact that the people are the electors of their public servants means that the Nigerian People are sovereign over their public servants. As such they are entitled to exercise their sovereign votes likewise in justice as much as they exercise their votes to elect their officials. I can provide by email a link or website to the Grand Jury and Trial Jury if requested to better understand how these systems work. I am a Filipino living in California USA and I am recommending this system for adoption in the Philippines.

The Jury system shall enhance judicial independence from politicians. It will emancipate judges of their bondage with the politicians who recommended them to their judicial positions. The people, through their juries, shall, in turn, shield their judges from unwarranted intrusion in the function of justice by powerful abusive leaders.

"The jury is the only anchor ever yet imagined by man that can force a government to observe the principles of its constitution." ... U.S. President Thomas Jefferson said.

When justice is a government monopoly, that monopoly is always exercised to favor the rich and powerful with the resulting discrimination over the common and ordinary citizens. It prevents the common people to have a hand in their justice system as if they are mere second class citizens in their country.