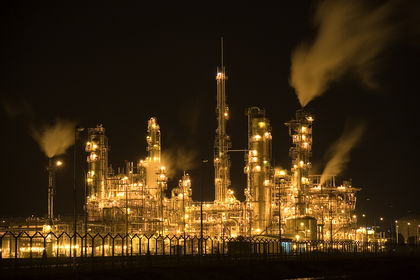 Manufacturing accounted for less than 5% of GDP in 1999, but experienced 4.9% growth in 2000. Due to the high costs of production that result from inadequate infrastructure, Nigeria's manufacturing capacity utilization remains low. Industry as a whole contributed 33% of GDP in 2000, mostly in the oil sector.

Nigeria is the 10th largest producer of oil in the world, and third in Africa. The oil sector supplies 95% of foreign exchange earnings and over 90% of total exports. Nigeria has proven oil reserves of 22.5 billion barrels. Nigeria's crude oil refining capacity was 439,000 barrels per day in 2002. There are four refineries in Nigeria, and hydrocarbon production is centered around Eleme, Warri, and Kaduna. Sabotage, fires, extended maintenance, and management problems plague the oil industry, however. As well, there has been political unrest raised over the issue of the equitable sharing of Nigeria's oil profits with the population. Nigeria has an estimated 124 trillion cubic feet (Tcf) of natural gas reserves, and the natural gas industry is seen to have great potential.

In October 2002, the International Court of Justice ruled in favor of Cameroon in its border dispute with Nigeria over the oil-rich Bakassi peninsula.

The textile industry is still in early stages of development. Between 60% and 70% of all raw materials used in textile production come from local sources. Foreign investment in the textile industry is led by Chinese and Indian investors. Other areas of expansion include cement production, tire production, and furniture assembly. The Delta Steel Plant at Aladja, built by a German-Austrian consortium, began production in 1982 and supplies three steel rolling mills at Oshogbo, Katsina and Jos. The steel complex at Abeokuta began producing in 1983 and was renovated in 1995. In 1999 most of these steel mills were inoperative, and the ones that did work had very small production rates.

This is article pin points the important industries we have in our country that can give over 500million of our unemployed youths job if they are rehabilited.very educating article that will go a long way to assist in research work like am doing.The writer should keep it up and try to update it to the current year.cheers.
2
Okorie, Okwudiri

This write-up points the direction to nigeria's economic prosperity and industrialization.
No other route can be surer.The time to follow through is now or we shall
sink into a deeper ocean of economic crisis and indirection.gbozaa! for the writer.
3
Mumbai Hotels

I'm doing a paper on how corruption under Abacha's rule affected the economy of Nigeria from 1995-2000. I need to quantify the information so I'm looking at the factors that show the growth of an economy.
Mumbai Hotels
4
saackybrown

government should please reduce their tax, and concentrate on the expenditure from oil sector which is over #124,000,000,000 every day. thanks
5
OLALEYE

I'm trying to write a project on " The problems of material in our Industries" Please put me true to the necessarty steps and information in your care. Thanks.
6
Anaeto chidimma

Someone should please,explain in detail the nature and structure of nigerian industries.
7
Abdulmumin K.

That was Nigeria before, what is the current situation of Nigerian industries? Many thanks to the writer.