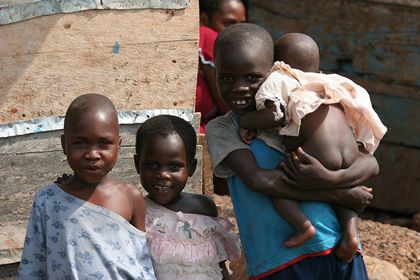 Nigeria's health care delivery system consists of a network of primary, secondary, and tertiary facilities. As of 1992, primary care was largely provided through approximately 4,000 health clinics and dispensaries scattered throughout the country. As for secondary care, there were about 700 health care centers and 1,670 maternity centers; tertiary care was handled through 12 university teaching hospitals with about 6,500 beds. As of 1999, there were an estimated 0.2 physicians and 1.7 hospital beds per 1,000 people. The target areas for mass procurement of medical equipment are the teaching hospitals. The lack of proper facilities and inadequate remuneration of public sector health care workers have also spurred the development of a limited number of privately-owned hospitals which cater to those who can afford them. The country is in need of medical supplies and equipment. Some pharmaceuticals are manufactured in Nigeria. In 2000, 57% of the population had access to safe drinking water and 63% had adequate sanitation. As of 1999, total health care expenditure was estimated at 2.8% of GDP.

Despite the receding influence of such endemic diseases as yellow fever, health problems in Nigeria remain acute. Malaria and tuberculosis are the diseases of most frequent incidence, but serious outbreaks of cerebrospinal meningitis still occur in the north. Just under half of all deaths are thought to be among children, who are especially vulnerable to malaria and account for 75% of registered malaria deaths. The prevalence of child malnutrition for children under age five as of 1999 was 46%. Goiter was present in 20% of all school-age children in 1996. Nigeria had the highest number of measles cases reported in 1995 of all African nations (95,915 cases and 12,393 deaths). In 1995, diarrheal diseases claimed 204,400 lives. As of 2000, almost 15% of all Nigerian children did not live to their fifth birthday. Malaria and diarrheal diseases accounted for, respectively, 30% and 20% of childhood mortality. Immunization rates for 1997 for children up to one year old were as follows: tuberculosis, 53%; diphtheria, pertussis, and tetanus, 45%; polio, 45%; and measles, 69%. Only 1% of children were immunized for yellow fever in 1993.

Schistosomiasis, guinea worm (19,766 cases in 1995), trachoma, river blindness, and yaws are other diseases of high frequency. Progress has been made in the treatment of sleeping sickness (trypanosomiasis) and leprosy. The former has been nearly eliminated by the introduction of new drugs, while the introduction of sulfone therapy has nearly halted the incidence of new cases of leprosy in the eastern states. A program for the eradication of river blindness and malaria has been undertaken in cooperation with The World Health Organization. The government is also working on the control of sexually transmitted diseases, including HIV/AIDS, through public education and behavior change.

HIV/AIDS has reached epidemic levels in Nigeria. At the end of 2001, the number of people living with HIV/AIDS was estimated at 3.5 million (including 5.8% of the adult population) and deaths from AIDS that year were estimated at 170,000. HIV prevalence in 1999 was 5.1 per 100 adults.

Only 15% of married women used contraceptives in 2000. The fertility rate in 2000 was 5.3 children per woman surviving her childbearing years. The life expectancy for the Nigerian was only 47 years in 2000. As of 2002, the crude birth rate and overall mortality rate were estimated at, respectively, 39.2 and 14.1 per 1,000 people.

Nigerian health sector is in bad shape because the economy is in bad shape.health is about education and wealth.if you are not educated,you cant live a healthy life and if there is no financial independence,when acute and chronic diseases approach,there would be no means to combat them.Above all,your health is in your hands not your Doctor's.Eat good,sleep well,exercise regularly,be gainfully employed and fulfil your divine purpose.Nigeria;good people,great nation.God bless Nigeria.
2
Angie

Hello, im just interested in getting the name of organisations that help in nigeria. In the teaching or building departements. I would love to help in any of those organisations but am really not sure how it works or if they even accept people to work with them.
3
Nwani Ambrose

well done sir! Sincerely i appreciate all your efforts in terms of health problems in nigeria but haven say that, i will be well convince if this problems is clearly highlighted one by one for good comprehensive ability. ie problems of medical health care service in nigeria. Thanks.
4
Oluwatoyin S. B

What are the problem of health care sytem in nigeria?
5
Anthony

Thanks for the data you provided.I would appreciate if you an send me an update on the number of health facilities for the various levels of care in Nigeria.I need it urgently for academic work.Thanks and well done for the good work you're doing.
6
CHIDOZIE

Nigerian health is really backwards it really needs to be looked into.
7
Festus. Ayinde

Thanks for the data you provided.I would appreciate if you could send me updated data of health facilities for the various levels of care in Nigeria.I need it urgently for academic work. Thanks and well done for the good work you're doing.
10
dorothy

I am glad i found this site. Please let me know me on the provision of public health and funding in Nigeria. I want to work in my little corner. Kudos for the good work.
11
PRIMOS

I will say, I rather find this publication interesting since it exposes certain health issues that requires immediate attention. I would gladly help in any way to see that these issues are resolved. I am also currently doing something about this content on devhope sante . You may get to me directly through my email or through one the the listed.
12
Ntofon A O

Healthcare services and availability will continue to plague Nigerians as long as our Leaders and Politicians continue to squander the God given resources we have. Why are3 Nigerians laundering money to Dubai, America, Europe to name just a few? Why are so many Nigerians flying to India, America, Canada, Malaysia, South Africa for health issues or treatment? Why is healthcare, education and advocacy for wellness and good health not at the forefront of our national discourse? I have been going to Nigeria since 1996 to provide free medical services to our people. Just recently during such a mission, I ran into a lot of problems transporting the medications to my final destination. During the free medical mission over 3,000 were attended to, with all kinds of diseases. The ailment ranged from Typhoid, iinternal and external nfections, prostate problems, diabetes, glaucoma, HIV/AIDS, malaria, fever of unknown origin, infertility, series of eye problems, dental pain and teeth decay, malnutrition, Intestinal worms, Hypertension, Respiratory diseases. People in the Rural and Riverine areas still belief that Witchcraft and Witches are the reasons they have their misfortunes. The organizations I work with over the years have covered over 60,000 patients which represents a drop in the bucket. We need donations from Nigerians who want transparency and accountability. We can empower the grassroots to rise against the servitude and deprievation of adequate healthcare, reduction in poverty rate, and empowernment of the citizens who want the Nation to survive. Government all levels must invest seriously in healthcare over a sustainable period to providr the most needed equipments, pharmaceuticals and staffing ready tackle the menace in our society. Numerous victims of vehicle accidents have died due to lack of emergency facilities equiped to deal with them. It is a shame in Nigeria that we cannot take of own. I cry for the poor, the children who leave for schools hungry, orphans with no one to care of them. Nigerians in Diaspora join me in reaching out to our people. Together we can bring a reprieve and sanity to our people with network, resource or the means to achieve the goals and ambitios.