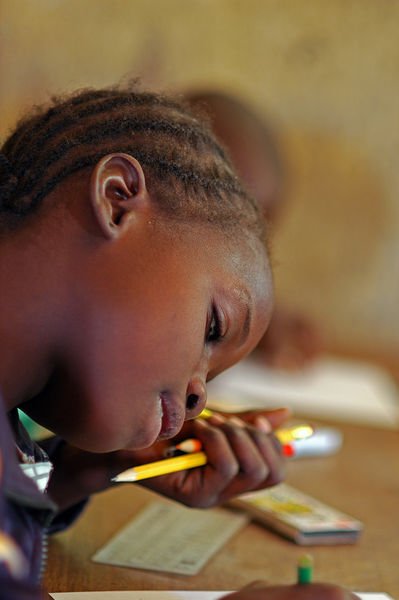 The 1979 constitution made primary education the responsibility of the states and local councils. State and federal authorities have concurrent powers over post-primary education. The first six years of primary education were made compulsory in 1976. Recent years have seen a marked growth in educational facilities. Projected adult illiteracy rates for the year 2000 stand at 35.9% (males, 27.7%; females, 43.8%). As of 1995, public expenditure on education was 0.5% of GDP.

The advancement in education in the southern states, compared with the relative lag in the northern states, reflects the contribution of Christian missions to the Nigerian educational system. Teacher-training colleges are operated by missions or voluntary societies; their schools, however, are regulated and largely supported by the government. Primary education begins in the local language but introduces English in the third year. In 1994 there were 16,190,947 students in 38,649 primary schools, taught by 435,210 teachers. In secondary schools, 4,451,329 students were taught by 152,592 teachers. The pupil-teacher ratio at the primary level was estimated at 37 to 1 in 1995.

There are 13 polytechnic colleges and four colleges of technology. A major obstacle to the further advancement of education in Nigeria is the shortage of qualified teachers; large numbers of foreigners are employed, particularly by the universities. In 1993–94, universities had 12,031 teaching staff and 207,982 pupils.

It is a pity to note that the standard of education in Nigeria is on the decline because the government does not infuse funds into the education sector.As a result of this the lecturers only teach outdated materials.Most rich people send their kids abroad to get good education and care less about the average nigerian student who couldn't afford to do this.The education in Nigeria has become one which is fit for those who have no hope for a better chance at good education
2
cae

It will be interesting to what the present government is doing to enhance the quality of education provision in Nigeria especially investment in technical training.
3
Kenneth H.

Education is pivotal to national development. The quality of education is reflected on the sectors.
4
D.y.

Added to government investing more money in the educational sector, students should take their studies seriously. More qualified and dedicated teachers and lecturers should be employed as a matter of urgency in our primary, secondary and tertiary institutions in the country. Lecturers should endeavour to do their work and not intimidating or victimising the serious students who are making genuine efforts to uphold the dignity of labour. Parents should allow their children to make use of their God given brains and stop running from one end to the other to either buy certificate for their children or pay people to write examinations for them. Lastly, invigilators of all exams should be honest and refuse to be bribed or bought over. Who knows! Such an invigilator who refused to expose evil because of money may end up being killed untimely by a quack doctor he refused to expose during the school days. All hands must be on deck to ensure a high standard of education in Nigeria as it is in other countries of the world.
6
Ameh

It never cease to amaze me the nonchalant attitudes of our leaders over the lingering and incessant strike that we experience always in this country over the pass years.My question is,for how long are we going to experience this unproductive and unpleasant scenario?This cancerous attitude has eaten so deep into our educational system and it seems like there is no hope for us young generation of this great country.Now,let us look at it this way,when those who have pass through the system as students,as lecturers and as member of ASUU are behaving as if all is well in the system,tell me how will those that are not in the system react to the same scenario?It is quiet unfortunate the situation we find ourselves.Where is the hope of educational system in Nigeria?
8
Chris

It is very unfortunate that this present government shows no remorse for poor citizens of Nigeria. Education is the only hope the poor to leave an average life.Remember genius without education is like silver in a mine.
9
Bello Olalekan Muritala

The standard of eduation can still improve only if there is committment of project implimentation by the government and Private investors and so called "Rich men" having the zeal for educational progress. Most people or 'teachers' who love teaching will not pertake in the teaching line because they have a better offer. Offers like working in an air-conditioning environment and collecting a huge sum of money. The only way forward is being God fearing, committment, being just and fair and the most of all is to have the spirit of piety.
10
NASIR KUDIRAT

Despite huge sum of money being annually pumped into the economy's education sector, the outcome is nothing to write home about, corruption is now the order of the day, even qualified candidate in the teaching career are not favourably considered except they know who knows who! may God touch the heart of those leading us in their respective capacity so they cld know that an enabling environment in all ramification is all it takes for a country to grow.
11
ekene

Education in nigeria should be equiped with facilities that will make effective.
12
Gift

Outline the reason why education is poor in Nigeria
13
ade

Nigerian education is on a sick bed. it needs surgical operation. Unfortunately, needed doctors have been claimed by corruption and brain drain.
14
chibyk

What about other years,you know am currently working on a similar topic now as an under graduate,I will appreciate an help u can offer.
15
Gbolahan

state the contribution of roman to nigeria educational system
16
Shalom

E-education will help, free education is good, but free & quality education is ok for a healthy society. Young & better it will be!!!.
17
Nancy tsegba

They make us pay more, development fee and left things wost. university of Jos a good example. Now student felt they should be considered. Jos people can just take the advantage of students protesting for another crisis.
19
Bis

On education: Universities do not assess their lecturers, no feedback system whereby the performance of each lecturer is checked. I had university lecturers who did not entertain asking questions. Lecturers that simply did not know how to lecture and having a PhD does not make his/her a good lecturer or a morally sound one. Every university must know how each lecturer performs by getting feedback from the students on EACH of their lecturers and take it up.

Not to talk of lecturers that demand sex from female students and threaten to fail them if they do not comply. Why would they not prefer to spend so much more money in Ghana.
20
Amodu Timilehin

Nigeria education need a lot of renovation, either by the govement, learners or among the teacher's generally. Our gorvement should try and invest a huge amount of money on education, wish i know they can never regret.our science lab are not well equiped whish lead to low performance among the science student not to mention about the rest department in the school.A well professional trained teacher under a university faculty of education or college of education should be employed to impact relevant knowledge to the learners so that they can read about us and not we reading about the white men always in conclution the seriosness of our student really matter to bring all about the development of education in nigeria.
22
joy

Why student may or may not complete their education in Nigeria.
23
felix

Education is so vital in a nation and i believe it will lead to a huge development. Government needs to pump more fund to this sector.