Through extensive archaeological research, much evidence has been uncovered indicating that man has been present in northern Niger for over 600,000 years. By at least 4000 BC , a mixed population of Libyan, Berber, and Negroid peoples had evolved an agricultural and cattle-herding economy in the Sahara. Written history begins only with Arab chronicles of the 10th century AD . By the 14th century, the Hausa had founded several city-states along the southern border of what is today the Republic of the Niger. About 1515, an army of the Songhai Empire of Gao (now in Mali), led by Askia Muhammad I, subjugated the Hausa states and captured the Berber city of Agadez, whose sultanate had existed for many generations. The city had been important largely because of its position on the caravan trade routes from Tripoli and Egypt into the Lake Chad area. The fall of the Songhai Empire to Moroccan invaders in 1591 led to expansion of the 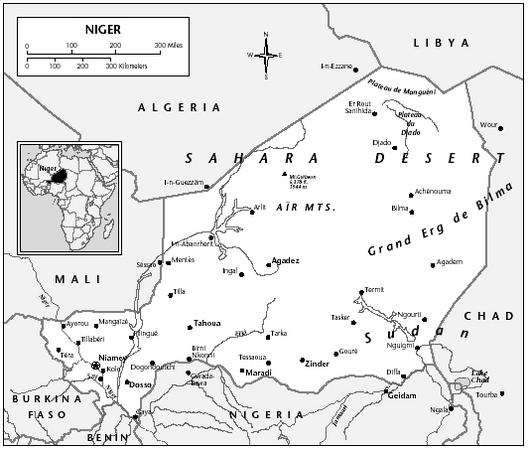 Bornu Empire, which was centered in northeast Nigeria, into the eastern and central sections of the region. The Hausa states and the Tuareg also remained important. It was probably during the 17th century that the Djerma settled in the southwest. Between 1804 and 1810, a devout Fulani Muslim named 'Uthman dan Fodio waged a holy war against the Hausa states, which he subjugated along with a part of the Bornu Empire, west of Lake Chad. About that time, European explorers began to enter the area, starting with a Scot, Mungo Park, in 1805–06.

Bornu, Hausa, and Fulani entities vied for power during the 19th century, a period during which political control was fragmented. The first French military expeditions into the Niger area, at the close of the 19th century, were stiffly resisted. Despite this opposition, French forces pushed steadily eastward and by 1900 had succeeded in encircling Lake Chad with military outposts. In 1901, the military district of Niger was created as part of a larger unit known as Haut-Sénégal et Niger. Rebellions plagued the French forces on a minor scale until World War I, when a major uprising took place. Some 1,000 Tuareg warriors attacked Zinder in a move promoted by pro-German elements intent on creating unrest in French and British African holdings. British troops were dispatched from Nigeria to assist the French in putting down the disturbance. Although this combined operation broke the Tuareg resistance, not until 1922 was peace fully restored. In that year, the French made Niger a colony.

Niger's colonial history is similar to that of other former French West African territories. It had a governor but was administered from Paris through the governor-general in Dakar, Senegal. From 1932 to 1947, Niger was administered jointly with Upper Volta (now Burkina Faso) for budgetary reasons. World War II barely touched Niger, since the country was too isolated and undeveloped to offer anything of use to the Free French forces.

In 1946, the French constitution conferred French citizenship on the inhabitants of all the French territories and provided for a gradual decentralization of power and limited participation in indigenous political life. On 28 September 1958, voters in Niger approved the constitution of the Fifth French Republic, and on 19 December 1958, Niger's Territorial Assembly voted to become an autonomous state, the Republic of the Niger, within the French Community. A ministerial government was formed by Hamani Diori, a deputy to the French National Assembly and secretary-general to the Niger branch of the African Democratic Rally (Rassemblement Démocratique Africain—RDA). On 11 July 1960, agreements on national sovereignty were signed by Niger and France, and on 3 August 1960, the Republic of the Niger proclaimed its independence. Diori, who had been able to consolidate his political dominance with the help of the French colonial administration, became Niger's first president. His principal opponent was Djibo Bakary, whose party, known as the Sawaba, had been banned in 1959 for advocating a "no" vote in the 1958 French constitutional referendum. The Sawaba was allegedly responsible for a number of unsuccessful attempts to assassinate Diori after 1959.

Diori was able to stay in power throughout the 1960s and early 1970s. His amicable relations with the French enabled him to obtain considerable technical, military, and financial aid from the French government. In 1968, following a dispute between the ruling Niger Progressive Party (Parti Progressiste Nigérien—PPN) and the civil service over alleged corruption of civil service personnel, the PPN was given a larger role in the national administration. Over the years, Diori developed a reputation as an African statesman and was able to settle several disputes between other African nations. However, unrest developed at home as Niger, together with its Sahel neighbors, suffered widespread devastation from the drought of the early 1970s.

On 15 April 1974, the Diori government was overthrown by a military coup led by Lt. Col. Seyni Kountché, the former chief of staff who subsequently assumed the presidency. Madame Diori was killed in the rebellion, as were approximately 100 others, and the former president was detained (1974–80) under house arrest. Soon after the coup, French troops stationed in Niger left at Kountché's request.

The economy grew markedly in the late 1970s, chiefly because of a uranium boom that ended in 1980. The Kountché regime, which was generally pro-Western, broke diplomatic relations with Libya in January 1981 in alarm and anger over Libya's military intervention in Chad. Relations with Libya slowly improved, and diplomatic ties resumed in 1982. Nevertheless, Niger continued to fear Libyan efforts at subversion, particularly among the Tuareg of northern Niger. In October 1983, an attempted coup in Niamey was suppressed by forces loyal to President Kountché. Kountché died of a brain tumor in November 1987, and (then) Col. 'Ali Seybou, the army chief of staff, was appointed president.

In 1989, Seybou created what he intended to be a national single party, Le Mouvement National pour la Société de Développement/The National Movement for a Developmental Society (MNSD). However, the winds of democratic change ushered in multiparty competition. At the forefront for political reform was the labor confederation, which organized a widely observed two-day-long general strike. Following the example of Benin, a National Conference was held from July to October 1991 to prepare a new constitution. The conferees appointed an interim government, led by Amadou Cheiffou to work alongside the Seybou government to organize multiparty elections. Widespread fighting in the north and military mutinies in February 1992 and July 1993 postponed the elections, but a new constitution was adopted in a December 1992 referendum.

Niger's first multiparty elections took place on 27 February 1993. Mamadou Tandja, who succeeded Seybou as MNSD leader came in first with 34%. However, with Mohamadou Issoufou's support, Mahamane Ousmane defeated him in the March runoff with 54% of the vote. In the legislative elections, the MNSD won the largest number of the seats (29), but a coalition of nine opposition parties, the Alliance of Forces of Change (AFC) dominated the National Assembly with 50 of the 83 seats. Prime Minister Issoufou led the AFC.

The new government found itself threatened by an insurgency in the north. In March, it reached a three-month truce with the major Tuareg group, the Liberation Front of Air and Azaouak (FLAA), and was able to extend it for three more months. By September, however, the Tuaregs had split into three factions and only one, the Front for the Liberation of Tamoust (FLT), agreed to renew the truce for three more months. Some Tuaregs, chiefly under the Armée Revolutionnaire de la Libération du Nord Niger (ARLNN) continued the rebellion, prompting more government reprisals.

The Tuareg raids created tension with Libya, suspected of inciting the insurgencies, and divided Nigerians over issues of favoritism. The government appeared biased in favor of members of the Djerma-Songhai (or Zarma-Songhai), one of Niger's five major ethnolinguistic groups. In April 1995, a tentative peace was reached via the joint mediation of Algeria, Burkina Faso, and France. However, ethnic disturbances continued in the south of the country.

In late 1994, disagreements between the president and the leadership of the National Assembly resulted in a political stalemate lasting throughout 1995. In the legislative elections of 12 January 1995, the AFC succumbed to factionalism allowing the MNSD to win a slight majority (29 seats). The MNSD formed a ruling coalition with its allies in the Democratic and Social Convention (24 seats). However, the two sides fought over the appointment of a prime minister, and then-prime minister, Hama Amadou, and President Ousmane fought over IMF austerity measures. In January 1996, Colonel Ibrahim Baré Maïnassara (known as Baré) toppled Ousmane and dissolved the Assembly. The military regime suspended political parties and civil liberties, and placed the president, prime minister, and president of the Assembly under house arrest. Despite Baré's pledge to restore democracy, donors cut assistance to Niger.

In May 1996, voters approved a new constitution that strengthened the powers of the executive. However, only 40% of the electorate voted. Baré lifted the ban on political parties, and in the July elections, despite evidence of massive fraud, declared himself the winner with 52% of the vote. Ousmane received 19% Tandja Mamadou 16%, Mahamadou Issoufou 8%, and Moumouni Amadou Djermakoye 5%. Baré's UNIRD took 52 of 83 Assembly seats in the November 1996 legislative elections.

On 9 April 1999, while boarding his helicopter, President Baré died in a hail of bullets. Political gridlock gripped the country, eroded public confidence in government, and allowed the military to intervene. The day prior to the assassination, opposition leaders had called on Baré to step down. Major Daouda Mallam Wanké said the presidential guard had opened fire in self-defense, and his junta later described the murder as an unfortunate accident. Few people believed it was, and the coup was roundly condemned by the international community. Baré's widow, Clemen Aicha Baré, filed claims against Wanké, as the prime perpetrator, and against the former prime minister Ibrahim Assane Mayaki for his alleged role in the assassination.

In October 1999, Wanké made good on his promise to return the country to civilian rule. Despite allegations of vote rigging, seven candidates contested the presidential elections. In the first round, Mamadou Tandja (MNSD) took 32.3% of the vote to Mahamadou Issoufou's (PNDS) 22.8%. In the 24 November runoff, Tandja was elected with 59.9% to Issoufou's 40.1%. Observers declared the second round free and fair. In the 24 November Assembly elections, five of seven parties won seats. The MNSD took 38 of 83 seats, the CDS 17, the PNDS 16, the RDP 8, and the ANDP 4.

The new National Assembly passed an amnesty for perpetrators of the January 1996 and April 1999 coups to avoid "the spirit of revenge or any form of resentment." Eight members of Maïnassara Baré's party dissented. Tandja said his top priority would be to work for political, social, and institutional stability, essential for national recovery.

In May 2002, Niger and Benin submitted a boundary dispute between them to the International Court of Justice in the Hague. At issue are sectors of the Niger and Mékrou Rivers and islands in them, in particular Lété Island.

On 30 July 2002, soldiers from three garrisons in the southeastern Diffa region mutinied, protesting low and overdue salaries and improper working conditions. The mutiny threatened Niamey, but troops loyal to the government put down the 10-day rebellion on 9 August. In December, at least 80 of the mutineers who were arrested in August escaped from prison.