The railroad system is administered by the National Railroad Office and consists of 1,907 km (1,185 mi) of standard-gauge railways, about 1,003 km (623 mi) of which are electrified; diesel-operated trains are used on the remainder. The main lines run from Marrakech to Casablanca, Rabat, and Sidi Kacem and then branch north to Tangier and east to Meknès, Fès, and Oujda (on the Algerian border).

Casablanca is by far the most important port, second largest in Africa, it accounted for 40% of goods loaded and unloaded. Tangier is the principal passenger and tourist port; Mohammedia handles most oil imports and can accommodate 100,000-ton tankers. There are also regional ports at Safi, Agadir, and Nador, as well as 10 minor ports. The Moroccan Navigation Co. (Compagnie Marocaine de Navigation-COMANAV), the largest shipping company, is 96% government owned; 41 merchant ships had combined gross tonnage of 227,364 as of 2002. 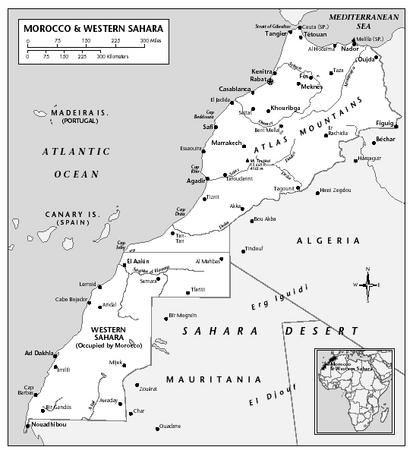 Morocco has eight international airports, at Casablanca, Rabat, Tangier, Marrakech, Agadir, Fès, Oujda, and Al-Hoceima. In all there were 67 airports in 2001, 26 of which had paved runways. The government-controlled Royal Air Maroc was founded in 1953 and operates flights to the US, Latin America, Europe, Africa, and the Middle East; the airline also provides domestic service through a subsidiary, Royal Air Inter. In 2001, 3,680,700 passengers were carried on scheduled domestic and international airline flights.