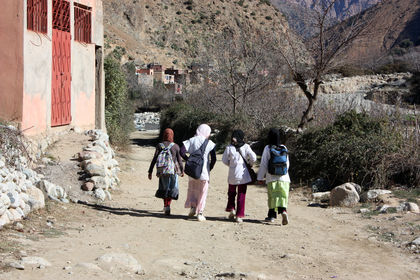 Projected adult illiteracy rates for the year 2000 stand at 51.1% (males, 38.1%; females, 64.0%). In efforts to combat illiteracy, the king has established learning centers in over 100 mosques where citizens between the ages of 15 and 45 can receive literacy courses on Islam, civic educations, and hygiene. The general school system includes modern secular public institutions, traditional religious schools, and private schools. As of 1999, public expenditure on education was estimated at 4.9% of GDP.

Six years of compulsory primary education was made mandatory under law in 1962. Girls leave school at a younger age than boys and are a minority in secondary as well as primary schools. The language of instruction in primary schools is Arabic during the first two years, and both Arabic and French are used for the next three years. French is partly the language of instruction in secondary schools. The traditional religious schools are attended by only a small fraction of students. The government is committed to a unified public school system but has permitted private schools to continue because of the lack of alternative resources.

Morocco has six universities. Al-Qarawiyin University at Fès, founded in 859, is reputed to be the oldest university in the world; it was reorganized in 1962–63 as an Islamic university, supervised by the Ministry of Education. The first modern Moroccan university, the University of Rabat (now the Muhammad V University), was opened in 1957. Other universities are Muhammad bin Abdallah (founded 1974), in Fès; Hassan II (1975), Casablanca; Cadi Ayyad (1978), Marrakech; and Muhammad I (1978), Oujda. There are about two dozen colleges and conservatories. In 1997, all institutions of higher education had a combined total of 311,743 students, 41% of whom were female.

thinks for this information about education in morocco
2
zakaria eljaafari

thanks for everything, you are a good person , take care and keep going on
3
sabira

I love Morocco and wish to study there. Thanx. Yusuf
5
Carolyn Griffin

Does anyone know a Mr. Kamal with th Morocco school distriect and how to reach him?
6
Natasha

If an adult in Morocco wishes to get their diploma later in life, are there special schools or courses like the GED in the US?
7
Erycina

good article, thanks for giving so much information about morocco, but there is a mistake considering the fact that morocco has only 6b universities, i believe that there are more than 6 universities an in other cities too.
tnx
8
chahin

Hey everybody I thank all of u for this comment .Im here for asking difficulties faced teachers and students for my reseach in morocco :primary school
9
Slycko

Thanks for this information about educatin in Morocco . I love Morocco ("v")
10
abdelhak

i want to know if there's schools in morocco for kids who has low vision problem.thank youy