Long uninhabited, Mauritius was probably visited by Arab and Malay seamen and later by Portuguese and other European voyagers. However, significant contact did not take place until the Dutch, under Admiral Wybrandt van Warwijck, arrived in 1598. They named the island after their stadtholder, Prince Maurice of Nassau. Settlers arrived in 1638; their settlements were abandoned in 1710, however, and the French took possession in 1715, sending settlers from Réunion in 1721. The island was governed by the French East India Company until 1767, and by the French government for the next 43 years, except for a brief period of independence during the French Revolution. During the Napoleonic wars, French-held Mauritius became a major threat to British shipping in the Indian Ocean, and Britain occupied it in 1810.

Under British rule, Mauritius became a sugar-producing island. The French community secured major control of the cane fields and sugar refineries; lacking any appreciable British settlement, the island remained French in culture. Abolition of slavery in the British Empire caused an acute labor problem as the former slaves, African in origin, left the sugar fields to go into other occupations. To offset this loss, the UK, from 1835, allowed the planters to import indentured laborers from India. The system continued until 1907, with 450,000 Indians migrating to Mauritius.

The constitution of 1831 provided for a Council of Government, in which representation was largely by Europeans, although a few Creoles won nomination. The constitution of 1886 provided for a council of 27 members, including 10 elected members. The electorate was limited by property qualifications, which denied the population of Indian descent elective representation until 1926. The constitution of 1947 abolished property qualifications and extended the franchise to both sexes. Since 1948, the Indian population has dominated the elective seats. As a result of a constitutional conference held in London in September 1965, Mauritius was granted full internal self-government.

Mauritius became independent on 12 March 1968 and one month later became a member of the UN. Disturbances at the time of independence between Muslims and Creoles forced declaration of a state of emergency, at which time UK troops from Singapore aided in restoring order. Sir Seewoosagur Ramgoolam, chief minister in the colonial government, became the first prime minister after independence. Ramgoolam's Mauritius Labor Party (MLP) held power alone, or in coalition with others, until June 1982 when an alliance of the Mauritian Militant Movement (MMM) and the Mauritian Socialist Party (PSM) captured all 60 directly elected seats on the island of Mauritius. This coalition, known as the Militant Socialist Movement (MSM) formed a government. MMM leader Aneerood Jugnauth became prime minister. In March 1983, however, 11 of the 19 ministers resigned, all MMM members, and new elections were called. The voting, in August of that year, produced a clear mandate for a new coalition forged by 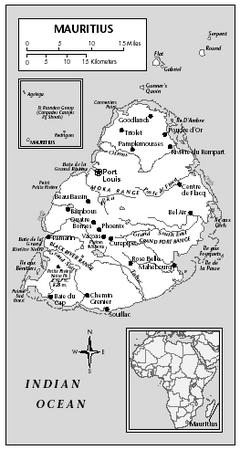 Jugnauth's coalition received a mandate again in the September 1991 general elections, winning 59 of 62 directly elected seats. As promised, the MSM/MMM alliance amended the constitution making Mauritius a republic within the Commonwealth. Since 12 March 1992, Queen Elizabeth II has been replaced by a Mauritian chief of state.

In 1993, there was trouble in the coalition when a prominent minister in the MMM met officials of the Social Democrats (PMSD). The minister was fired by Jugnauth, but the other MMM members stayed in the coalition. At times, it appeared that the ruling coalition would fray, but they managed to negotiate terms of conciliation and stood united for the 20 December 1995 elections when they took 65% of the vote, or 60 of 62 elected seats. Dr. Navinchandra Ramgoolam became Prime Minister. Cassam Uteem and Angidi Veeriah Chettiar were later elected president and vice president.

Trouble in the coalition resurfaced in June 1997 when Ramgoolam fired MMM's leader, Paul Bérenger, who was Vice-Premier and Minister of Foreign Affairs. Seven cabinet ministers belonging to MMM resigned in protest and, together with other elected MMM candidates, joined the parliamentary opposition group. This precipitated a second cabinet reshuffle since Ramgoolam took power in 1995. This left the labor party in power with only small parties aligned with it. Bérenger's place was now occupied by the vice president of the Labor Party, Kailash Purryag.

This unbalanced configuration provoked fears of a repeat of the ethnic clashes that had rocked Mauritius in 1968; however, ethnic violence did not materialize. After three days of rioting in the capital (Port Louis) and other parts of the country in February 1999, the country gradually returned to normal. Clashes between Rastafarians and police were triggered by the death in police custody of a popular reggae singer, Kaya. Three protesters were killed, a policeman died of heart failure, and over 100 were wounded in the clashes.

Although the country had suffered corruption scandals under the previous administration of Prime Minister Navin Ramgoolam, Mauritius has largely avoided the corruption scourge characterizing much of Africa. After winning the September 2000 elections, the coalition government under Jugnauth and Béringer stated that its priorities were to boost local and foreign investor confidence, and to re-launch the economy.

Mauritius is one of a few sub-Saharan African countries to attain the rank of middle-income status and rule by constitutional process—the country has had only three prime ministers since independence. In February 2002, two presidents—in their mostly ceremonial role—resigned in the space of a week objecting to anti-terror legislation prompted by the 11 September attacks on the World Trade Center. An interim president, Supreme Court Chief Justice Arianga Pillay, signed the bill into law, which was twice passed by the parliament owing to strong support from Prime Minister Anerood Jugnauth. The constitution requires the president either to sign the bill into law or leave office.