Tens of thousands of years ago, the Sahara was verdant and filled with game. Desiccation eventually forced the inhabitants southward, a process that in the 3rd and 4th centuries AD was speeded by the Berbers, who had domesticated the camel. As the Berbers pressed down from the north toward the Senegal River valley, black Africans who lived in the path of the invaders were pushed southward. From the 9th century, a Berber tribe, the Lamtuna, and two other Berber groups cooperated in control of a thriving caravan trade in gold, slaves, and ivory from the south, in exchange for desert salt and north African goods.

The Almoravids, a group of fervent Muslim Mauritanian Berbers conquered Northwest Africa and much of Spain in the 11th century. They had, in turns, hostile and peaceful trade relations with the black African empire of Ghana. Their authority in the Mauritanian region had declined by the late 11th century. After the Almoravid empire was destroyed in the 12th century, the Mali kingdom, successor to Ghana, extended over southeastern Mauritania and dominated trade in the area. Later Mali was succeeded by the Songhai of Gao, whose empire fell to Moroccan invaders in 1591. Meanwhile, during the 14th and 15th centuries nomadic Arab tribes of Yemeni extraction, the Banu Ma'qil, moved into Mauritania; during the 17th century, they established complete dominance over the Berbers. They called themselves the Awlad-Banu Hassan. The Arabs and Berbers in Mauritania have since thoroughly intermingled into an Arabized Mauritania.

The Portuguese were the first Europeans to arrive, attracted in the 15th century by the trade in gold and slaves; later, the gum arabic trade became important. Competition for control was keen among Portuguese, French, Dutch, and English traders. The issue was resolved in 1815 when Senegal was awarded to France 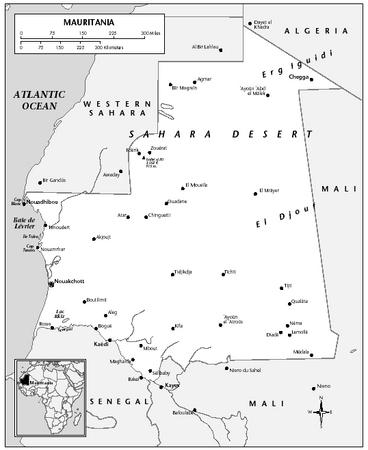 in the post-Napoleonic war settlement. During the 19th century, the French explored the inland regions and signed treaties with Moorish chieftains. Penetration of the desert zone was accelerated around the turn of the century in attempts to thwart Moorish raids on the Senegal River tribes. A Frenchman, Xavier Coppolani, was responsible for the signing of many treaties, and played a key role in the extension of French influence in the area. By 1903, he was in control of Trarza, the Moors' main base for raids on the river tribes. Coppolani was killed in 1905, but his work was completed by Gen. Henri Gouraud, who gained effective control of the Adrar region by 1909. Mauritania was established as a colony in 1920, but its capital was located at Saint-Louis in Senegal. Mauritania thus became one of the eight territories that constituted the French West Africa federation.

In 1946, a Mauritanian Territorial Assembly was established, with some control over internal affairs. During the next 12 years, political power increasingly passed to local political leaders. Mauritania voted for the constitution of the Fifth French Republic at the referendum of 28 September 1958. It thus became a self-governing member of the French Community, and the Islamic Republic of Mauritania was proclaimed in November 1958. Complete independence was attained on 28 November 1960.

Since independence, Mauritania has experienced two successful coups in at least six attempts due in part to human and civil rights abuses committed by the government. The black minority, located largely in the south, has staged anti-discrimination protests and elicited the attention of the world human rights community regarding the alleged continuation of slavery in Mauritania. In foreign affairs, the government has turned increasingly toward the Arab world. Mauritania joined the Arab League in 1973 and withdrew from the franc zone during the same year, but ties with Europe, especially France, and the United States remain strong. The disastrous drought that struck Mauritania and the rest of the Sahel region during 1968– 74 elicited substantial aid from the EC, the United States, Spain, France, and the Arab countries.

On 14 November 1975, the governments of Spain, Morocco, and Mauritania reached an agreement whereby Spain agreed to abandon control of the Spanish Sahara by 28 February 1976 and to share administration of the territory until then with Morocco and Mauritania. On 14 April 1976, Morocco and Mauritania announced a border delimitation agreement under which Morocco received more than two-thirds of the region (including the richest phosphate deposits). The annexation of Western Sahara was opposed by the Popular Front for the Liberation of Saguia al-Hamra and Río de Oro (generally known as Polisario), which proclaimed the region as the Saharan Arab Democratic Republic. When Polisario forces, supported by Algeria, launched a war in Western Sahara, guerrilla raids on the Mauritanian railway, iron mines, and coastal settlements, including Nouakchott, forced Mauritania to call French and Moroccan troops to its defense. The effects of the war weakened the government both economically and politically, and in July 1978, Moktar Ould Daddah, Mauritania's president since 1961, was overthrown by a military coup. On 5 August 1979, Mauritania formally relinquished its portion of the disputed territory, except for the military base of LaGuera, near Nouadhibou; its share was occupied and annexed by Morocco. Mauritania thereafter pursued a policy of strict neutrality in the Morocco-Polisario conflict, a policy that strained relations with Morocco.

In the wake of the 1978 coup, the constitution was suspended and the National Assembly and the ruling Mauritanian People's Party (PPM) were dissolved. After a period of political uncertainty, Lt. Col. Khouna Ould Haydalla became chief of state and chairman of the ruling Military Committee for National Salvation as of 4 January 1980. There were unsuccessful attempts to overthrow his government in 1981 and 1982. Amnesty International claimed in 1983 that more than 100 political prisoners, including a former president and former prime minister, were being held in total darkness in underground cells in the desert. These prisoners were freed shortly after a military coup on 12 December 1984 brought Col. Moaouia Ould Sidi Mohamed Taya to power as chief of state.

However, as the economy faltered, racial, ethnic, and class tensions increased between the Maurs or Moors—aristocrats, who have dominated government—and black African slaves or descendents of slaves, who have adopted Moorish culture, but remain second-class citizens. Although the government refuses to release census data, it is estimated that Maurs account for 30– 60% of the population. The black population, which is concentrated along the Senegal River border, has organized an underground Front for the Liberation of Africans in Mauritania (FLAM); grievances were linked with an unsuccessful coup attempt in 1987.

Inter-ethnic hostilities in 1989 exploded when a border dispute with Senegal led to race riots that left several hundred "Senegalese" dead in Nouackchott. The "Moorish" trading community in Senegal was targeted for retaliation in Senegal. Thousands of refugees streamed across the border in both directions. Mass deportation of "Mauritanians of Senegalese origin" fueled charges that Mauritania was trying to eliminate its non-Moorish population. Africa Watch estimated that at least 100,000 black slaves were being held in Mauritania.

Against this backdrop, the military conducted a bloody purge from September 1990 through March 1991 during which some 500 mostly black soldiers were murdered. Taya legalized opposition parties in July 1991, but he also stepped up Arabization policies. Parliament granted the perpetrators of the purge legal immunity in May 1993.

On 26 January 1992, Taya was elected in Mauritania's first multi-party presidential election, with 63% of the vote. Ahmed Ould Daddah, the strongest of the four rivals and half-brother of Mauritania's first president, gained 33% of the vote. However, the election was marked by fraud. The legislative elections that followed in March were boycotted by six of the 14 opposition parties. Taya's Democratic and Social Republican Party (PRDS) easily won 67 of 79 Assembly seats.

Multi-party municipal elections were held in 1994, and the PRDS won control of 172 of the nation's 208 administrative districts. Presidential elections were held on 12 December 1997. Main opposition parties claimed that campaign conditions favored the reelection of Taya to a second six-year term and called for a boycott of the elections. Kane Amadou Moctar, the first black African ever to run for the presidency, presented himself as a non-aligned candidate with a platform promising to fight slavery, assist the return of Mauritanian refugees from Senegal, and reform the fisheries policy. The elections took place without incident, and Taya was declared the winner, taking 90% of the votes. Turnout was estimated at 70%, despite the opposition boycott. Moctar received less than 1% of the vote. Opposition leaders described the poll as a "masquerade," citing reports of widespread irregularities that included children casting ballots and polls remaining open as late as 11 pm.

Elections were held in April 1998 for 18 of the Senate's 56 seats. The PRDS won 17 of the 18 contested seats, with an independent gaining the remaining seat. In January 1999 the PRDS again won most of the 208 districts contested in municipal elections, though it is estimated that only 16% of the registered votes went to the polls.

Despite multi-party elections, Mauritania is far from a free society. Opposition politicians are harassed and arrested. In 1994 and again in 1998, Cheikh Sadibou Camara of the UDP was arrested for suggesting that the slave trade was continuing— publicly stating the suggestion is considered a crime in the country. Anti-Slavery International, based in London, presented an annual anti-slavery award to Camara in November 1998. The government also harasses journalists and has suspended publication of newspapers and magazines on numerous occasions in recent years. Since 1993, Mauritania has been denied US trade privileges because of its poor human rights record. Ahmed Ould Daddah continues to confront the Taya regime, being arrested in April 2000 and released a few days later, without charges. In May 2000 demonstrations by opposition parties in Nouakchott demanded an independent electoral commission.

In June 2003, the government was dealing with a coup attempt that nearly overthrew Taya. As many as 40 people were injured and six killed in two days of heavy fighting in the capital on 8–9 June. Sala Ould Henena, who was fired from the army because of his opposition to the government's ties with Israel, was accused of leading former and mid-ranking army officers in the putsch. In response to the coup, the United States sent a 34-member military assessment team to Nouakchott to analyze US Embassy security needs. Analysts suspected that the cabal may have been provoked by a government crackdown earlier in the month against 32 Islamic leaders for their alleged ties to a foreign network of Islamic extremists, and to former Iraqi leader, Saddam Hussein.

However, Taya's links to Israel and his pro-Western, pro-US foreign policy have come under increasing criticism in the largely Muslim country. In 1999, Mauritania became only the third Arab League state to establish full diplomatic relations with Israel. Indications were that Taya intended to go ahead with presidential elections scheduled for November 2003.