Mali's chronic deficit in trade and other goods and services is largely offset by aid from other governments and international organizations. The balance of payments is sharply influenced by the volume in cotton exports and the world price of cotton, the price of gold, the volume of official livestock exports, and the value of government-purchased imports. The value of exports covers only about 75% of imports. Mali's minimal industrial base and its dependence on imported machinery and petroleum negatively impact its balance of payments.

The US Central Intelligence Agency (CIA) reports that in 2001 the purchasing power parity of Mali's exports was $575 million while imports totaled $600 million resulting in a trade deficit of $25 million.

The International Monetary Fund (IMF) reports that in 1997 Mali had exports of goods totaling $562 million and imports totaling $552 million. The services credit totaled $82 million and debit $346 million. The following table summarizes Mali's balance of payments as reported by the IMF for 1997 in millions of US dollars. 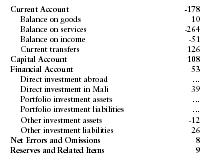