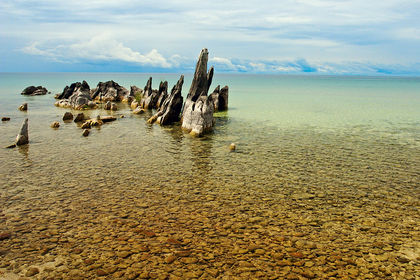 Variations in altitude in Malawi lead to wide differences in climate. The vast water surface of Lake Niassa has a cooling effect, but because of the low elevation, the margins of the lake have long hot seasons and high humidity, with a mean annual temperature of 24° C (75° F ). Precipitation is heaviest along the northern coast of Lake Malawi, where the average is more than 163 cm (64 in) per year; about 70% of the country averages about 75–100 cm (30–40 in) annually. In general, the seasons may be divided into the cool (May to mid-August); the hot (mid-August to November); the rainy (November to April), with rains continuing longer in the northern and eastern mountains; and the post-rainy (April to May), with temperatures falling in May. Lilongwe, in central Malawi, at an elevation of 1,041 m (3,415 ft), has a moderately warm climate with adequate rainfall. The average daily minimum and maximum temperatures in November, the hottest month, are 17° C (63° F ) and 29° C (84° F ), respectively; those in July, the coolest month, are 7° C (45° F ) and 23° C (73° F ).

This is a great website for young children about my age (11 to 12)!!! I was assigned a country brochure! Oh you would never guesse what country I got,Malawi!! It is a great country!! Thank you for your time to read this e-mail!!!
2
olivia

all these articles are really helpful, i'm 11 too and i find it really good.
3
olivia!!

this is great!!! im in the 7th grade and im working on an ss project, i had to research 4 coutries!;P not fun, but this really helped me thx!
5
Rachel

I'm a 9th grade AP student and I found this resource of information helpful, thank you.
6
Rachel

I got a country project assigned and i got Malawi, this really helped.. thanks!! i am also in the 11-12 age group!! thanks a lot
7
emma-jane

Thanks sooo much! 8th grade with a big country project!
9
maria

thanks this really help for my ss project for 7th too. you guys rock
10
Jade

This really helped me with my social studies project for 7th grade(:
Its such an interesting country!
11
anonomus

this helped me alot. im in year 8 and had to draw a name of a country from a hat thanks heaps :)
12
Jack

this helped me alot! i had an assignment, and it gave me the sufficient information, for me to acheive maximum overall marks. i would like to congradulate the writers , for a splendid blog. peace out ;)
13
catherine

I really like this website as it helped me with my homework on, you'll never guess Malawi!!!
14
Ky

This site is the best I've used so far! I really find it helpful for this priject I have to do,
15
GHali

I am in 8th grade and was assigned a project on malawi and this article was short but so helpful! :)