Malawi runs an annual deficit on current accounts, which is generally mitigated but not annulled by capital inflows, mostly in the form of development loans.

The US Central Intelligence Agency (CIA) reports that in 2001 the purchasing power parity of Malawi's exports was $415.5 million while imports totaled $463.6 million resulting in a trade deficit of $48.1 million.

The International Monetary Fund (IMF) reports that in 1994 Malawi had exports of goods totaling $363 million and imports totaling $639 million. The services credit totaled $22 million and debit $234 million. The following table summarizes Malawi's balance of payments as reported by the IMF for 1994 in millions of US dollars. 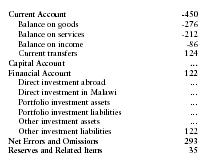