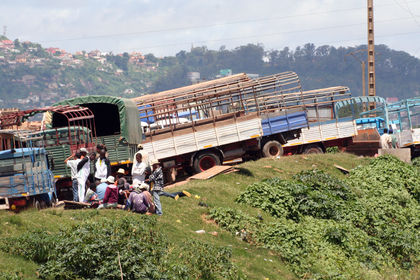 Although the terrain makes railway building difficult and expensive, there are four main railroads, all publicly operated, covering 893 km (555 mi). These run from Toamasina to Antananarivo, with a branch from Moramanga to Lake Alaotra; from Antananarivo to Antsirabe; and from Fianarantsoa to Manakara on the east coast.

There are about 49,837 km (30,969 mi) of motor roads on the island, of which 5,781 km (3,592 mi) were paved in 2002. The main roads radiate from Antananarivo to Mahajanga and Antsiranana, to Toamasina, to Fianarantsoa, and to Ihosy, from which one branch goes to Toliara (Tuléar) and another to Tolänaro (Fort Dauphin). The road from Antananarivo to Fianarantsoa is tarred, as are portions of the other main routes. In 2000, there were 39,900 passenger automobiles and 54,200 commercial vehicles in use.

The three major ports are Toamasina, Nosy Be, and Mahajanga; Toliara and Antsiranana are also important. There are at least 13 other ports, engaged mainly in coastal trade. There was considerable freight traffic along the Pangalanes Canal, which runs parallel to the east coast from Toamasina to Farafangana for a distance of 700 km (435 mi). The canal was closed in 1979, however, because of silting; dredging had begun by 1985. The merchant fleet consisted of 15 vessels, with gross weight of 27,199 tons in 2002.

this really is good i need to no like what kind of transportaiton there is bus,taxi,...pleasehelp thank Bob
2
sally

ya same with bob, I need to know what in madagascar they use to get around
3
jane

wow, it really helps me a lot, thanks for this web
4
SpongeBob

i need to know how they get around like cars ships trains & airplanes.
5
sponge and bob

i no i need to no how they get around but thanks this helped me for a project :D
6
I love nipples

Hey I love this. It really helped me a lot and it worked!!
7
satti

I want to know how can I trnasport goods from Frnace to madagascar...???

This helped a little, but I need to know how they get around. This did help, though. Thank you!